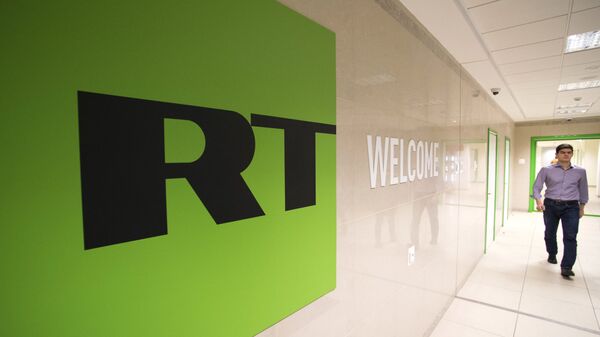 © Sputnik / Evgeny Biyatov
/
Go to the mediabank
Subscribe
International
India
Africa
RT editor-in-chief Margarita Simonyan says that the RT broadcaster will not halt operating in the United States despite the US authorities’ attempts to impose pressure on the broadcaster’s office in the country.

SOCHI (Sputnik) – The RT broadcaster will not halt operating in the United States despite the US authorities’ attempts to impose pressure on the broadcaster’s office in the country, RT editor-in-chief Margarita Simonyan said.

Speaking at the World Festival of Youth and Students in the Russian southern city of Sochi, Simonyan said that on Wednesday, RT "was supposed to be designated as a foreign agent in the United States, which can limit our working capabilities."

"Our lawyers are currently doing everything possible to avoid this. Unfortunately, I cannot speak about all the details due to legal reasons. We are of course not going away. What does not kill you makes you stronger," Simonyan said.

Simonyan Slams Johnson for Lambasting Opposition Over Appearances on RT
The RT office in the United States has been facing pressure from US authorities over allegations on its role in meddling in the 2016 US presidential election. In one of the recent cases, in September, the US Department of Justice asked a contractor of RT in the United States to register under the Foreign Agents Registration Act. The pressure against RT has led to mass resignations in the broadcaster's US office and difficulties in finding new staff.

Simonyan said earlier that RT’s lawyers told the broadcaster that registration under FARA was required, otherwise, on October 17, its employees and property would be arrested.

In June, US Congress members introduced the Foreign Agents Registration Modernization and Enforcement Act bill, which would broaden the scope of FARA to include RT, by expanding Department of Justice authority to investigate attempts to "unlawfully influence the political process."