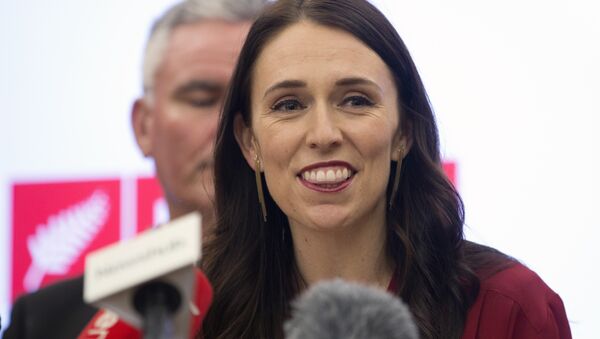 © AP Photo / Mark Mitchell
Subscribe
Only 80 days after becoming the youngest ever chief of New Zealand's Labour Party, she is set to become the country's next prime minister. But who is Jacinda Ardern and what is behind her rise to power?

On her first day as leader of the party, the 37-year-old former DJ, was asked the oldest question in the book for a female politician — whether she planned to have a baby.

Her feisty response was: "That is totally unacceptable in 2017 to say women should have to answer that question in the workplace."

Ardern, a cat lover who lives with her partner TV presenter Clarke Gayford, joined New Zealand's Labour Party at the age of 17.

She worked for British Prime Minister Tony Blair and then New Zealand Prime Minister Helen Clark, before being elected as an MP in her own right in 2008, aged just 28.

Labour was struggling in the polls earlier this year under its uncharismatic leader Andrew Little and Ardern was elected unanimously by her party's MPs, who saw her as a fresh face with new ideas.

She has pledged to decriminalize abortion, cut immigration, lift children out of poverty and get rid of university fees.

She also suggested New Zealand should dump the Queen as head of state and become a republic.

Brought Up as a Mormon

Ardern was brought up as a Mormon but left the Church of Latter Day Saints because of their stance on homosexuality.

One of her biggest hobbies is DJing and in 2014 she played a 45-minute set at the Laneway Festival in Auckland.

"I just wanted to not take things too seriously and just play some stuff that people might recognize. But at the end of the day I've got a day job and a really important one," she said at the time.

Her election campaign, using the slogan of "Let's do this" got off to a flying start and her party's poll ratings jumped as Kiwis warmed to her style.

But when it came to polling day on September 23 "Jacindmania" fell short and the National Party remained the largest party in New Zealand's parliament.

Despite having 56 seats in the 120-seat parliament, National Party leader Bill English was unable to cobble together a majority.

On Thursday, October 19, in an extraordinary turnaround Winston Peters, leader of NZ First, suddenly threw his party's weight behind Ardern.

Ardern said she had "enjoyed the theater" of the political drama over the last month and was "privileged and humbled" to become prime minister.

'I feel extraordinarily honoured and privileged to be in a position to form a Government with Labour at the lead.' @jacindaardern

"Labour has always believed that government should be a partner in ensuring an economy that works and delivers for all New Zealanders," said Ardern.

NZ First is a right-wing nationalist party and it may seem odd bedfellows with Labour and the Greens.

"We've had to make a choice, whether it was with National or Labour, for a modified status quo, or for change," said Peters.

But Ardern said they agreed on many common issues — affordable housing, restricting foreign ownership of homes, building a new port for Auckland and reopening the investigation into a coal mining disaster seven years ago which 29 miners.

Record levels of migration have fueled housing demand in New Zealand, pushing house prices higher and pricing many ordinary New Zealanders out of the market.

Labour chose her in a bid to surf the wave of "change" and she has already drawn comparisons with Macron and Canada's Prime Minister, Justin Trudeau, who is actually eight years older.

Ardern will be the third woman prime minister of New Zealand, following Jenny Shipley and Helen Clark. But she is much younger than they were when they led the country and she is perceived as speaking up for the younger generation of New Zealanders.

She is set to be sworn into office in the next few days and will get to work on making big changes in New Zealand.

And she will have to do it all without caffeine…she does not drink coffee.