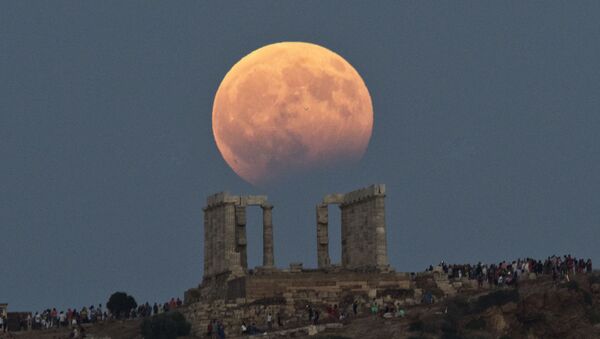 A study of the surface of Earth’s moon has found an unlikely candidate for the best spot to build a permanent human settlement: a lava tube, an underground tunnel carved by one of the moon’s long-dormant volcanoes.

A number of intact lava tubes were discovered in the Marius Hills area of the moon by researchers from the Japan Aerospace Exploration Agency (JAXA) and Purdue University in Indiana. Using radar data from JAXA's SELENE lunar orbiter and gravitational data from NASA's GRAIL lunar probes, the team was able to discover the tubes.

The cave in question is estimated to be 31 miles long and 330 feet wide, which would make it the second biggest lava tube on Earth. If it were located on Earth, that is.

"It's important to know where and how big lunar lava tubes are if we're ever going to construct a lunar base," says a researcher at JAXA. Astronomers were already eyeing the volcanic Marius Hills as a potential site for landings and colonization. "Dreams of putting people into lava tubes on the moon have been ongoing for decades, and this work is an important step in turning that dream into reality."

"They knew about the skylight in the Marius Hills, but they didn't have any idea how far that underground cavity might have gone," said Jay Melosh, a professor of Earth, atmospheric and planetary sciences at Purdue. "Our group at Purdue used the gravity data over that area to infer that the opening was part of a larger system. By using this complimentary technique of radar, they were able to figure out how deep and high the cavities are."

Lava tubes from beneath volcanoes as channels through which lava once flowed. Due to the nature of convection, the exterior sections of the lava can cool and harden into a tube of rock — and when the rest of the lava drains out, a solid underground tunnel is left behind.

The moon has no active volcanoes, but that was not always the case: dense magma has been detected deep under its surface. The last volcanoes on the natural satellite are thought to have gone extinct a few hundred million years ago. The main consequence of this for humans is that many parts of the moon have networks of easily-accessible lava tunnels close to the surface. The Marius Hills tube in question formed an estimated 3.5 billion years ago.

Science & Tech
For the First Time, We May Have Discovered a Moon Outside the Solar System

Underground tunnels aren't ideal for living on Earth — but the moon, a rock with a much weaker magnetic field and atmosphere, is a different story. A human living there would have to constantly contend with radiation, extreme temperatures and deadly meteorites that could puncture their space suits. Underground life would provide protection from all three.

Better yet, physicists had previously speculated that lunar lava tubes could be far larger than the ones found on Earth due to the moon's lower gravity, large enough to fit even a large city. That would make the lunar lava tubes dozens of times larger than Kazumura Cave, the biggest known lava tube complex on Earth, located on the island of Hawaii.