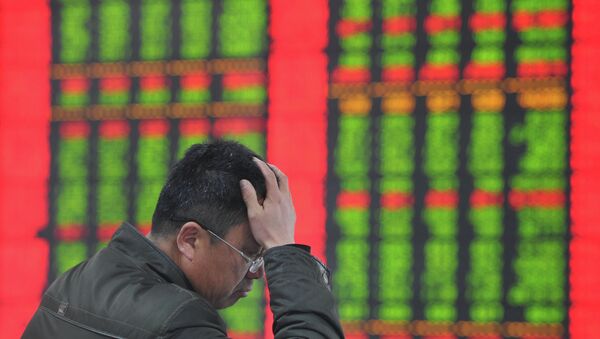 © REUTERS / CHINA OUT
Subscribe
Chinese National Bureau of Statistics reported that the country's GDP is maintaining a medium-high growth rate.

BEIJING (Sputnik) — The Chinese economy grew 6.8 percent in the third quarter of this year, down from 6.9 percent seen a year ago, the National Bureau of Statistics said.

"The GDP for the third quarter of 2017 grew by 6.8 percent year-on-year, maintaining a medium-high growth rate which stayed within the range of 6.7 percent to 6.9 percent for nine consecutive quarters," the report read.

The national economy has maintained the momentum of stable and sound development in the first three quarters, the agency said, and is expected to maintain medium-high rate of growth.

"However, we must be aware that international conditions remain complicated and volatile and the national economy is still at a crucial stage of restructuring with the foundation for sound development yet to be consolidated," the bureau warned.

No Sale: Trump Blocks Beijing Purchase of US Chipmaker, Angering China
Last year, China’s economic growth dropped 0.2 points to 6.7 percent from the year before, the lowest in the past 26 years. This was in line with predictions made by Chinese authorities in early 2016.

The bureau also reported that industrial production in China accelerated by 6.7 percent in the first three quarters of this year compared to the same period in 2016.

"The total value added of the industrial enterprises above designated size in the first three quarters was up by 6.7 percent year-on-year in real terms, 0.7 percentage point higher than the same period last year," the report read.

The growth of investment in fixed assets has slipped to 7.5 percent, 0.7 percentage point lower than in the same period last year, while retail sales have gone up 10.4 percent year-on-year, with online retail growth rising 10.1 percent.