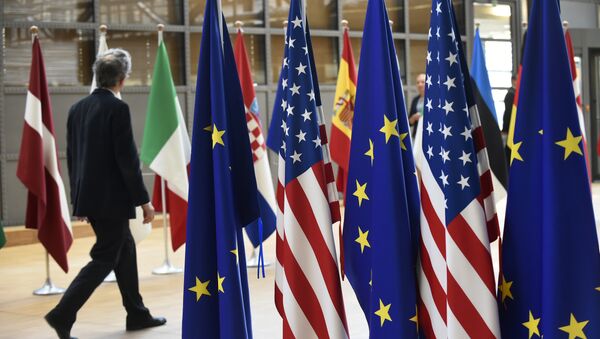 © AFP 2023 / JOHN THYS
Subscribe
International
India
Africa
US President Donald Trump continues to push against the 2015 Iran nuclear deal, looking for cause for the US to exit the agreement inked by his predecessor - but such a decision could do major harm to the US’ relationship with its European allies.

On Friday, Trump declared Iran noncompliant with the deal, batting the issue to Congress, which now has the ability to kill it entirely by reinstituting sanctions against Iran. Although this seems unlikely to happen, as Trump directly told Congress he wanted to renegotiate the deal and not end it, the decision has set off a panic domestically and abroad.

Brian Becker and Walter Smolarek of Sputnik Radio's Loud & Clear were joined by Catherine Shakdam, an independent journalist and author with a focus on Yemen and radical movements in the Middle East. They asked Shakda about her take on the looming schism between Washington and the European powers if the US continues to test the Iran deal.

​"What we what we're starting to see is an anti-US bloc forming, because the EU made it quite clear that it was to actually stand behind the deal, something that Washington is clearly not interested in. I don't think President Trump actually even envisioned the kind of repercussions that his decision [to decertify Iran] would have on the on a foreign policy level, and how it would actually affect his standing, not just in America but within the international community. There is no way that the EU would actually agree or even follow whatever Trump wants because they cannot — they simply cannot."

Shakdam went as far as to say that the end of the deal could "actually unravel whatever alliance we have had so far between the EU and the US… with the EU moving closer towards Iran, understanding that geopolitics now have changed. New positions need to be taken and new friendships need to be brokered."

She added that the damage done would be "irreparable. There is no coming back from this, because number one: international order would be broken as it would be against too many countries' interests. The EU, even if it's a partner of the United States, will do what is necessary and good for the EU rather than what in the interests of America."

"This political pragmatism is a reality that we can go up against, and I think that Washington forgets this. Washington is actually trying to actually discredit Iran and to demonize Iran, to basically promote war with Iran. Ultimately this is something that they would like to see happen. But Iran is not stupid, and Iran understand exactly the kind of game that Washington is playing, and it's not going to engage on that frequency. Iran will continue to abide by the rule of law and by just doing that is going to actually extend political traction and is going to position itself well as a valid partner."

"We don't live in a post-World War II world anymore," Shakdam concluded. "Things change, dynamics have changed and people have begun catch on and realize that Iran is not a demon. Even if people want to believe that, they're going to have to deal with it, because Iran is not going anywhere anytime soon. It's much better to get Iran involved and actually engage with the international community rather than try to antagonize them just because it would make Israel very happy. We have to understand that you can't determine the future of the of the world on Tel Aviv's whims; it would be ridiculous to do so."