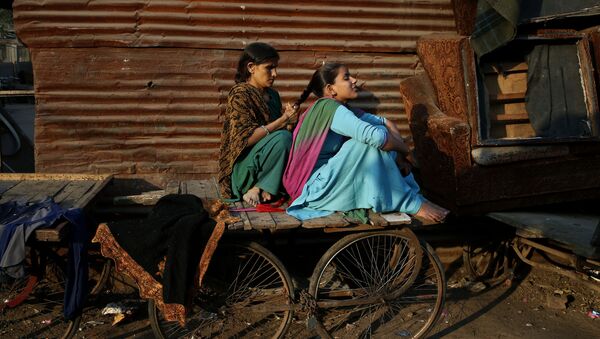 © AP Photo / Saurabh Das
Subscribe
While locals suspect soldiers of chopping off braids of women, the state police say they believe it to be a handiwork of anti-national elements trying to fuel further discontent against the armed forces and the Indian establishment in the valley.

New Delhi (Sputnik) — The mysterious braid-chopping incidents in India’s Kashmir region has turned into a grave problem, threatening to rattle the security situation in the already volatile region, with angry mobs assaulting soldiers on suspicion of being the culprit.

On Tuesday, at least five soldiers of the Indian Army were assaulted and stripped naked by angry mobs who were protesting the increasing incidents of braid-chopping. The protests were triggered by reports of several women’s braids being chopped off by an unidentified man in the in Rambagh, Kupwara, and Pulawama area on the previous night.

​The state police had to disperse agitating crowds by lobbing tear-gas shells in Sopore. The violent protests were prompted by a complaint of one Shareefa Begum who alleged that her braid was cut off by some unknown men in Ningli area of the town.

“She was washing her face when the masked men came and chopped her hair. Their language was not Kashmiri. Definitely, they are not local,” a local man in the victim’s neighborhood said.

Two Indian Air Force Commandos Killed in Gun Battle With Terrorists in Kashmir
Meanwhile, the state police say they smell a larger conspiracy behind the braid-chopping incidents. “We are trying to establish the motive behind the braid chopping. It has become utmost important to ascertain the motive behind the culprit’s actions. Once the motive is established, the investigation will become easy,” Muneer Ahmad Khan, Inspector General of Police said in a press conference in Srinagar.

The police have registered 105 complaints of the braid chopping incidents across the Kashmir Valley with 55 cases being reported from the south Kashmir. “There is no cooperation from the victims or from their families. We have started the scientific examination of the cases,” Khan added.

Video:Clashes erupt in Maisuma area of Sringar on Monday after a #BraidChopping incident took place in the area. #Kashmir pic.twitter.com/1EiQXXDzkc

​Earlier this month, locals had killed a 70-year-old man on the suspicion of being the braid-chopper. Last Sunday, six foreign tourists — three Australians, a South Korean, an Irish and a Briton – were allegedly apprehended and interrogated by suspicious locals. The tourists were later rescued by the state police.

Indian Security Forces Foil Major Attack, Gun-down Four Terrorists in Kashmir
According to a local resident, more than 120 braid chopping incidents have been reported in various parts of the Kashmir in last one month.  All the victims claimed that attackers sprayed chemicals on their faces and left them unconscious. When they woke up, they found their hair had been chopped off. Apparently, similar incidents were reported in Delhi and neighborhood region in July-August this year but after investigations, it was found that most of the women were mentally ill or had been in difficulty for various reasons including family trouble.
000000
Newsfeed
0
New firstOld first
loader
LIVE
Заголовок открываемого материала
Access to the chat has been blocked for violating the rules . You will be able to participate again through:∞. If you do not agree with the blocking, please use the feedback form
The discussion is closed. You can participate in the discussion within 24 hours after the publication of the article.
To participate in the discussion
log in or register
loader
Chats
Заголовок открываемого материала
Worldwide
InternationalEnglishEnglishMundoEspañolSpanish
Europe
DeutschlandDeutschGermanFranceFrançaisFrenchΕλλάδαΕλληνικάGreekItaliaItalianoItalianČeská republikaČeštinaCzechPolskaPolskiPolishСрбиjаСрпскиSerbianLatvijaLatviešuLatvianLietuvaLietuviųLithuanianMoldovaMoldoveneascăMoldavianБеларусьБеларускiBelarusian
Transcaucasia
ԱրմենիաՀայերենArmenianАҧсныАҧсышәалаAbkhazХуссар ИрыстонИронауОssetianსაქართველოქართულიGeorgianAzərbaycanАzərbaycancaAzerbaijani
Middle East
Sputnik عربيArabicArabicTürkiyeTürkçeTurkishSputnik ایرانPersianPersianSputnik افغانستانDariDari
Central Asia
ҚазақстанҚазақ тіліKazakhКыргызстанКыргызчаKyrgyzOʻzbekistonЎзбекчаUzbekТоҷикистонТоҷикӣTajik
East & Southeast Asia
Việt NamTiếng ViệtVietnamese日本日本語Japanese俄罗斯卫星通讯社中文（简体）Chinese (simplified)俄罗斯卫星通讯社中文（繁体）Chinese (traditional)
South America
BrasilPortuguêsPortuguese
NewsfeedBreaking
18:46 GMTEuropean Commission Yet Undecided on AUKUS Deal Response
18:35 GMTFellow ‘Van Life’ Camper Helps Authorities Locate Gabby Petito’s Body
18:33 GMTWhite House: Biden Hopeful Call With Macron Step to Return US-French Relations to Normal
18:25 GMTFive Held in India’s Karnataka for Asking Dalit Family to Pay Fine After Entering Temple
18:14 GMTFormer Treasury Secretaries Urge That US Debt Limit be Raised 'Without Delay'
18:07 GMTNo Genies in Sight: 'Well of Hell' Sinkhole of Yemen Explored by Cavers
17:42 GMTSaudi King Tells UN General Assembly Yemen's Houthis Reject Peaceful Solution to Conflict
17:35 GMTMessi Was 'Tyrant' to Barcelona Teammates in Training, Claims Manager Ronald Koeman
17:27 GMTInt'l Support Group for Lebanon Urges Government to Take Active Measures to Ease Crisis
17:07 GMTIndia: Anti-Terrorist Squad Arrests Islamic Cleric Over Religious Conversion Charge
17:01 GMT'Would Fire it Onto Ceiling': Prince Philip's Mustard Jokes Landed Him in Trouble With Queen
16:59 GMTREC Group Support for Kamaz Export Projects to Exceed 20 Billion Rubles
16:53 GMTThe Cypriot Caveat: Why Erdogan Shouldn't Call Russia Out on Crimea?
16:43 GMTPoland's PGNiG Says Received Right to Take Part in Certification of Nord Stream 2 Operator
16:39 GMTSotheby’s Puts Frida Kahlo’s Rare 1940 Self-Portrait Up for Auction
16:37 GMTFlash on Jupiter Possibly Caused by 'Alien Bomb,' Blogger Says
16:30 GMTIt's Massage Time: Bulldog Scratches Buddy's Back
16:29 GMTLNA Commander Haftar Instructs Col. Gen. al-Nazuri to Act LNA Head for Next 3 Months
16:20 GMTFrance to Return Ambassador to Washington Next Week After Macron-Biden Phone Call on AUKUS Spat
16:17 GMTWatch Haitian Deportees Throw Shoes at US Officials, Try to Storm Plane in Port-au-Prince