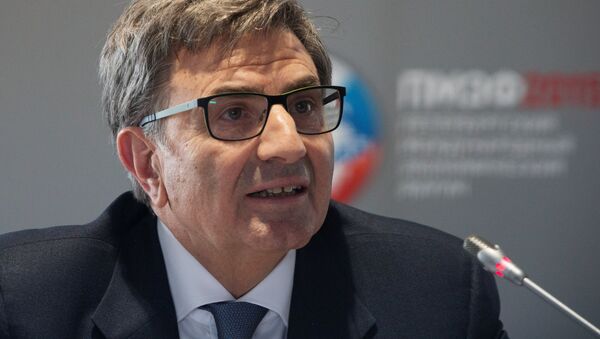 © Sputnik / Igor Russak
/
Go to the photo bank
Subscribe
In an interview with Sputnik, Bank Intesa board chairman Antonio Fallico shared his opinion on Western economic restrictions against Moscow and their impact on business, and commented on Russian progress in the blockchain field.

MOSCOW (Sputnik) – According to Antonio Fallico, anti-Russian sanctions are ineffective. He added that "Italian and European businesses think they are erroneous, do not lead to the achievement of the political goals set by their supporters."

The EU and the US first imposed sanctions on Moscow in July 2014 in connection with the reunification of Crimea and Russia and amid accusations of Moscow's alleged meddling in conflict-torn Ukraine — allegations Russia has denied. The sanctions affected the energy, defense and banking sectors. In turn, Russia imposed an embargo on the supply of food from countries that participated in anti-Russian sanctions. In parallel, the relations between NATO and Russia have taken a nosedive, as the bloc has been beefing up its military presence along the Russian border, which Moscow has repeatedly condemned as a provocative and unfriendly move.

Intesa's board chairman mentioned that the banking group Intesa Sanpaolo is interested in financing Russian oil company Rosneft's projects and added that it is studying options to finance the Nord Stream 2 project despite the sanctions.

The Nord Stream 2 is a two-gas pipeline project that is planned to be laid from the Russian coast through the Baltic Sea and to a hub in Germany.  The pipeline is scheduled to start its operation in 2018. The United States opposes the Nord Stream 2 project, which has been targeted by the US sanctions. Europe has criticized Washington's move, with Berlin saying the restrictions are illegal and are aimed at taking Moscow's share on the European energy market.

According to Fallico, Russia has made noticeable progress in the blockchain technology: "With regards to Russia, it has significantly advanced in this direction and is among the leaders, as I realized when I recently addressed the session on blockchain at the Eastern Economic Forum in Vladivostok… Blockchain technology may become a basis for creating systems with a high level of security. At the same time, the number of different financial and other transactions, for example, with real estate, is increasing. It involves both small businesses and households. This technology could be in demand for registering deals, mortgages, shares and others."

Blockchain technology concerns a database composed of so-called blocks, which constantly grows in a linear, chronological order. It is often applied for data management in financial services and cryptocurrencies.