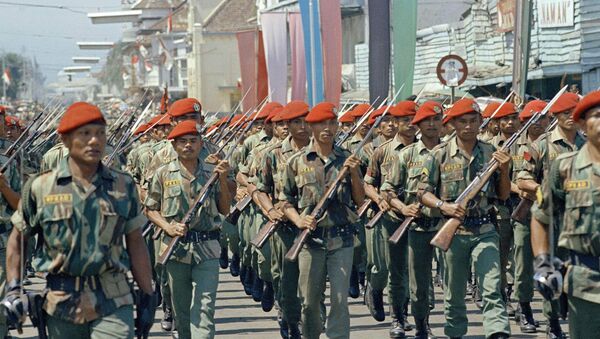 © AP Photo / Horst Faas
Subscribe
International
India
Africa
Thirty thousand pages of files have been released on US activities in Indonesia during the archipelago’s gory transition from a socialist dictatorship to a pro-West military dictatorship in the mid-60s. The documents confirm that Washington was aware of, and supported, the military takeover of the government and purge of communist opponents.

The anti-communist purges in 1965 and 1966 were horrific, described by the CIA as "one of the worst mass murders of the 20th century." Between 400,000 and 1 million accused leftists were killed, with some estimates going as far as to place the figure at 3 million.

It has long been known that the US and allied governments supported the 1965 military takeover. The US embassy, as well as the CIA, have been accused of providing weapons, economic assistance, and training to Suharto's forces as well as lists of names of 5,000 communists. The embassy asserted in 1990 that the list in question was compiled by a single official acting on his own direction, and scholars debated whether or not the US helped facilitate the mass killings.

One of the newly released cables came from the embassy's first secretary, Mary Vance Trent, who told Washington about a "fantastic switch which has occurred over 10 short weeks" that saw an estimated 100,000 people slaughtered.

A particularly shocking 1966 cable from CIA officer Edward Masters discussed the "problem" of captured communist prisoners. "Many provinces appear to be successfully meeting this problem by executing their [communist] prisoners, or killing them before they are captured, a task in which Muslim youth groups are providing assistance," Masters reportedly said.

US Senator Tom Udall (D-NM), who introduced a bill in 2015 calling for the declassification of all US documents related to the matter as well as Indonesia to create a truth and reconciliation committee on the massacre, praised the release of documents. "These documents will provide greater transparency about the United States' support for the Indonesian government during the same period that these horrible crimes were committed," Udall said in a statement.

"Today represents real progress. But in Indonesia, many of the individuals behind these murders continue to live with impunity, and the victims and their descendants continue to be marginalized and unrecognized. These injustices are holding back Indonesia from achieving reconciliation and realizing its democratic potential. Here in the United States, we must encourage the continued democratic progress of a vital ally, and we must confront our own role in these terrible acts. Only by acknowledging the truth about our own history will the United States be able to speak out forcibly and credibly to defend human rights in the future."

Indonesia, which had been a loose colony of the Netherlands for centuries, declared their independence in August 1945 and created the modern state of Indonesia, with the socialist and anti-imperialist Sukarno as the new nation's first president. Sukarno attempted to balance the military, political Islam and communism in a policy called "Nasakom" and was a founding member of the Non-Aligned Movement with other formerly colonized countries like Egypt and India.

But over time, Sukarno favored his communist allies more, especially those abroad in China and the Soviet Union. Poverty and hunger besieged the world's third largest communist country, and Indonesia accrued huge debts to Beijing and Moscow. Sukarno also cracked down on Islamists and attempted to weaken the society's military elements through measures like the creation of a communist-aligned peasant militia.

After a failed coup against Sukarno in September 1965 that the military blamed on the Indonesian communist party and Chinese actors, the nation quickly dissolved into a brief but extremely bloody purge. The military and Islamists allied to annihilate Sukarno's regime, slaughtering the communist party's leadership. The documents also suggested that the US embassy had credible evidence that the coup was not orchestrated by the communists — later analysis would question the Indonesian military's claim, and the culprits and motivation behind the coup attempt remain under dispute.

The rebellion's leader, Major General Suharto, seized control of the presidency and placed Sukarno under house arrest, where he died in 1970 of kidney failure. Suharto would remain the nation's US-friendly military dictator until he was forced to resign in 1998.

The legacy of the massacre remains complicated in Indonesia. School textbooks briefly discuss a "patriotic campaign," a national uprising where 80,000 communist oppressors were killed. A 2016 symposium meant to discuss the tragedy was met with severe backlash, and in September 2017 an anti-communist mob disrupted a meeting of activists to discuss the massacre.