Ilya Tsukanov
All materialsWrite to the author

OSF officials told the Wall Street Journal that Soros transferred much of his considerable wealth to the organization over a period several years, although the exact sum remained a secret until Tuesday. The revelation makes Soros' OSF the second-largest 'philanthropic' organization in the US, behind the Bill and Melinda Gates Foundation, and the third largest in the world.

World
Billionaire Soros Transfers Nearly $18Bln to His Open Society Foundations
The revelation of the immense sums involved plays to fears voiced by Soros' political and ideological opponents. Inside the US and around the world, Soros and his civil society grant-making network have been at the heart of numerous controversies related to attempts to interfere with or manipulate democratic elections and other political processes through funding for 'democracy development', the media, youth initiatives, good governance, and minority rights.

In the US, criticism against Soros has included accusations that the billionaire has been attempting to "destabilize" the country in the wake of Donald Trump's election. Last month, over 150,000 Americans signed a White House petition to have Soros declared a domestic terrorist and to strip him of his assets. The petition, which claims that Soros is using his wealth to try to "facilitate the collapse of the systems and constitutional government" in the US, has earned an official response from the White House, collecting over 50,000 signatures more than needed.

Alongside OSF, Soros' initiatives in the US include financial support for Media Matters for America, a self-described media watchdog fighting conservative media. During the 2016 presidential race, Soros actively supported Hillary Clinton and the Democratic Party, officially contributing over $10.5 million to her campaign. Playing the field, the billionaire has also provided support for neoconservative Republican groups like the McCain Institute. 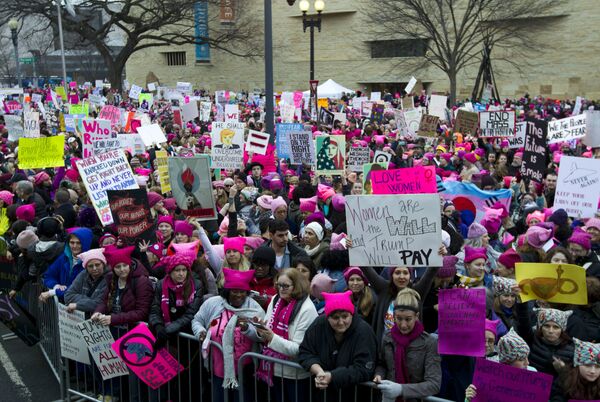 Women with bright pink hats and signs begin to gather for a protest against Donald Trump's presidency, Saturday, Jan. 21, 2017 in Washington, DC. Earlier this year, US media reported that Soros contributed $246 million to partners of the Women's March.
© AP Photo / Jose Luis Magana

Anger over Soros' efforts to manipulate local politics is even stronger in his native Hungary. Earlier this month, the European Commission issued Budapest an ultimatum over its non-governmental organization and education laws, which deliberately restrict civil society groups funded by Soros from operating in Hungary. Brussels has said that it could refer the case to the EU's Court of Justice. 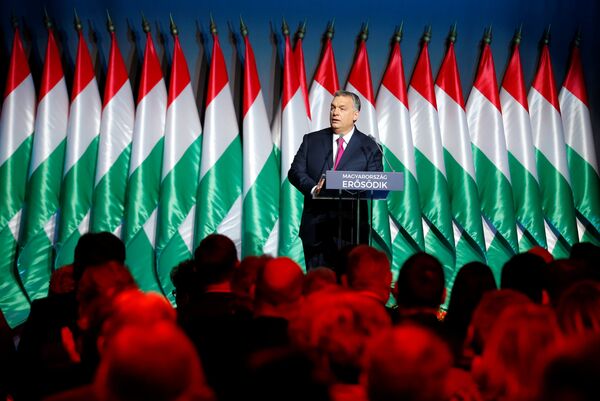 Hungarian Prime Minister Viktor Orban speaks during his state-of-the-nation address in Budapest, Hungary, February 10, 2017. Among world leaders, Orban is known as one of Soros' most outspoken critics.
© REUTERS / Laszlo Balogh

Earlier, Hungarian lawmakers approved a law stipulating that NGOs which receive over 24,000 euros a year must publicize their foreign sponsors and register as foreign-financed organizations. Budapest's Central European University, another Soros-funded initiative aimed at training regional political elites, has been left in legal limbo after the government deferred its accreditation. Budapest earlier dubbed the school "Soros University," and accused the billionaire himself of deliberately encouraging Europe's refugee crisis as a means to destabilizing the continent.

Soros' affiliated groups have also played an instrumental role in the turmoil in Ukraine, which saw the overthrow of the democratically-elected government of Viktor Yanukovych in February 2014. In August 2016, DC Leaks exposed Soros' involvement in the coup, and his organizations' work in the aftermath to influence reluctant Western actors to fall in line with EU efforts to 'democratize' and 'Westernize' the former Soviet republic. 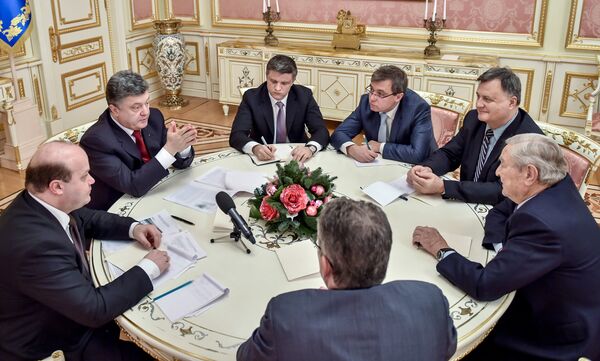 Russia ran out of patience for Soros and the OSF two years ago. In July 2015, the Russian Senate added the OSF to a list of organizations whose activities were deemed to pose a threat to Russia's national security. The Open Society Institute Assistance Foundation, another of Soros organization, was also included in the list. In November 2015, the Russian General Prosecutor's Office included OSF into a 'stop list' of foreign NGOs, deeming its activities to pose "a threat to the foundations of the constitutional system of the Russian Federation and the security of the state." Before the ban, the OSF had operated in Russia for over two decades, spending over $100 million on education, internet development, NGOs and support for media.

Finger in Every Pie

Soros and his various organizations have been implicated for involvement in a host of political conflicts around the globe, from his alleged financing of Catalan secessionists, to working closely with the US's so-called Burma Task Force to influence the ongoing conflict around the Rohingya in Myanmar.

Soros' affiliated activists have also been accused of involvement in fomenting political unrest in Poland, promoting the interests of the transnational EU elites against Poland's conservative government. Israel has accused him of undermining democracy there, he has been blamed for attempts to oust the government in Equatorial Guinea, and suspected of manipulating local politics in Malaysia ahead of the 2018 elections. The OSF has been implicated for its political involvement in Montenegro and Macedonia in their drive for EU and NATO membership. Soros and his allies are also believed to be heavily involved in the campaign encouraging Washington to introduce ever-tightening sanctions against Moscow. 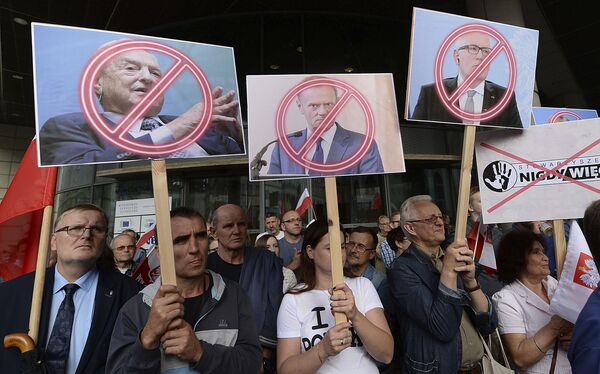 Soros' Ideology Exposed: A Post-Modern, Post-Family, Post-Border New World Order
Observers believe that the reason Soros-affiliated groups are so heavily involved in politics around the world stems from the billionaire's globalist ideology – which envisions a liberal, post-family, post-border 'New World Order', as outlined in his book, 'The Age of Fallibility'. Critics have warned that in the interest of achieving his goal, Soros is willing to buy governments, pay international organizations to spread anti-conservative values, manipulate national currencies, foment political unrest, and perhaps most importantly – spend considerable time and resources to spread these values among young people, particularly in developing countries.

The 'philanthropic' nature of his various initiatives notwithstanding, among the biggest controversies behind Soros and his organizations is the source of his fabulous wealth. The investor's shady 1992 currency speculation deal, which forced the Bank of England to devalue the pound, netted him a cool billion dollars in profit. Since then, he performed a similar trick several more times, including during the 1997 Asian financial crisis, when he bet against Thailand's currency, resulting in its collapse. In other words, Soros' 'philanthropic empire' is not only shady in and of itself, but also rooted in dirty money which has brought suffering to millions of people around the world.