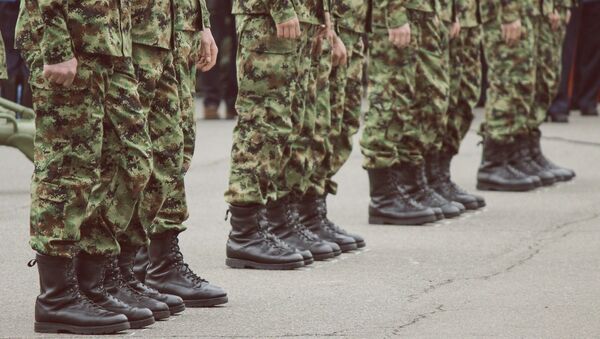 CC0 / /
Subscribe
Confidential reports indicate Swedish energy giant Vattenfall reached out to a private security firm to provide security for an offshore site in Scotland. While rarely acknowledged in the mainstream, these shadowy companies are part of a multi-billion dollar industry, and barely regulated.

UK Private Military Company Employed Former Child Soldiers in Iraq
In a "service offerings" bid sent to the Swedish energy giant in November 2016, DS-48 described itself as a provider of "comprehensive risk management" in an "increasingly hostile" world, and promised to protect employee safety, ensure projects were delivered on track, and safeguard Vattenfall's reputation and assistance with an "ongoing legal dispute" via video surveillance, security both on site and on computer systems and "discreet close protection."

The first phase of the package, which would cost at least US$60,000 (£45,000), and involve "human intelligence gathering" and a full-risk site assessment.

The legal dispute the papers refer to relate to an employment tribunal in which Vattenfall was accused of dismissing a site manager for whistleblowing. Former site manager Roger Hammond claimed the firm had failed to properly investigate claims staff were on drugs, and ignored his reports that an 11-year-old girl had been allowed to drive a digger, firing him instead.

Private military and security companies, firms staffed by former members of the military and intelligence services, are a booming but rarely acknowledged global industry, and the UK has been dubbed the "mercenary kingpin" of the sector by charity War on Want, with hundreds offering their services internationally.

Leading UK private military companies Aegis Defence Services, Control Risks, and Olive Group are among the top recruiters, and their boards are dominated by former military officers. UK-based multinational G4S is now the world's largest private security company, and 14 companies are based in Hereford alone, close to the headquarters of the SAS — from whose ranks at least 46 companies hire recruits, War on Want has calculated.

In Libya, UK companies led the way after the fall of Muammar Gaddafi in 2011. The Security Contracting Network, a recruitment forum for the industry, posted a message in the days following Gaddafi's fall saying there would be an "uptick of activity" as foreign oil companies "scramble" to get back to Libya, advising PMC employees to "follow the money, and find your next job." These firms are bound only by a system of self-regulation.

Foreign Office spending on contracts with private UK security companies quadrupled between 2003 and 2012, according to official figures. John Hilary, executive director at War on Want, said these companies "run amok" in Iraq and Afghanistan, "leaving a trail of human rights abuses in their wake."

"We're seeing the alarming rise of mercenaries fighting on the frontline in conflict zones across the world. It is the return of the 'dogs of war.' For too long this murky world of guns for hire has been allowed to grow unchecked. In letting the industry regulate itself, the government has failed — only binding regulation will do. The time has come to ban these companies from operating in conflict zones and end the privatisation of war," Mr. Hilary said.

The UK has signed up to an international code of conduct for "private security service providers" — establishing principles covering accountability to law and human rights. However, it's a voluntary code of conduct, and drawn up with direct consultation with the industry, rather than independent experts.

Nonetheless, The UN is drawing up plans for a legally binding international convention on private security and military companies.