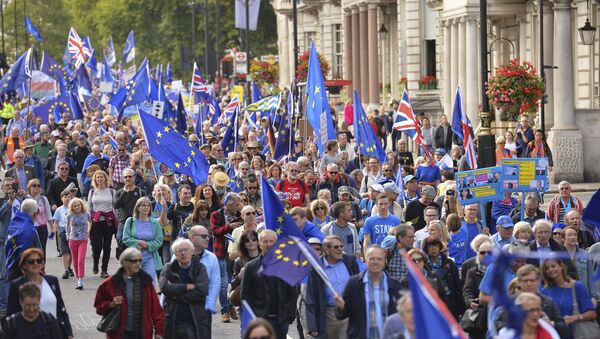 In the last year, hate crimes in England and Wales have surged nearly 30 percent - coinciding with the UK’s June 2016 vote to exit the European Union, the so-called “Brexit”. Both the Brexit vote as well as the recent string of deadly terror attacks in the UK have been followed with sharp increases in the number of hate crimes committed.

The UK Home Office, which handles both internal affairs and public safety, found that since the Brexit vote the number of recorded hate crimes has leapt 29 percent from 62,500 in the 2015-2016 period to 80,400 in the 2016-2017 period. Attacks were up across the board, regardless of motivation or targeted group.

Hate crimes in the UK are defined as any criminal act motivated by race, religion, sexual orientation, gender identity or disability. Eighty-nine percent of recorded hate crimes were either against the public order or violent offenses, according to the Home Office. Eighty percent of the attacks were racially motivated, with sexual orientation at a distant second at eleven percent, religion and disability both at 7 percent, and gender identity at 2 percent. A hate crime can be placed in multiple categories at once.

The number has been steadily increasing for years now, however: about 44,000 hate crimes were committed in 2011-2012, just over half as many as the 2016-17 period. The Home Office also explained that the increase in reports may be tied to improvements in reporting methods and police reforms meant to increase trust in law enforcement among a variety of communities. However, it was undeniable that there was a marked increase in UK hate crimes since the Brexit vote. The figures peaked at over 5,500 attacks in July 2016, the month after the vote.

In the same window of time, the number of prosecutions for hate crimes dropped about six percent — but the cases that were prosecuted were more likely to end in conviction, and the punishments were more severe.

"Crimes motivated by hate have a corrosive effect on society and it is pleasing to see the courts are using their powers to increase sentences in the majority of cases for the first time," said Director of Public Prosecutions Alison Saunders, the nation's top public prosecutor. "Sentence uplifts are important because they demonstrate… the hate crime element has been recognized and the perpetrator has received a more severe sentence as a result."

Opponents of Brexit have blamed the surge of hate crimes on the anti-immigration and British nationalist rhetoric used by parties such as the United Kingdom Independence Party (UKIP), the most recognizable champion of Brexit.

"The rise in hate crimes is a scar on the face of our nation. Politicians of all parties need to work together to tackle this scourge," said Labour MP Stella Creasy, who is also part of the pro-EU Open Britain campaign. "Ministers must show that Britain is a welcoming society despite our exit from the EU. They need to drop their anti-immigration rhetoric and stand up for an open, tolerant Britain."

Hate crimes reportedly spiked after each terror attack, most notably the June Finsbury Park Mosque car ramming attack, where a group of Muslims leaving a mosque were targeted in an apparent retributive attack for the London Bridge attack earlier in the month. One person was killed and 10 were injured.

"No one in Britain should have to suffer violent prejudice, and indications that there was a genuine rise in the number of offences immediately following each of this year's terror attacks is undoubtedly concerning," said Home Secretary Amber Rudd.