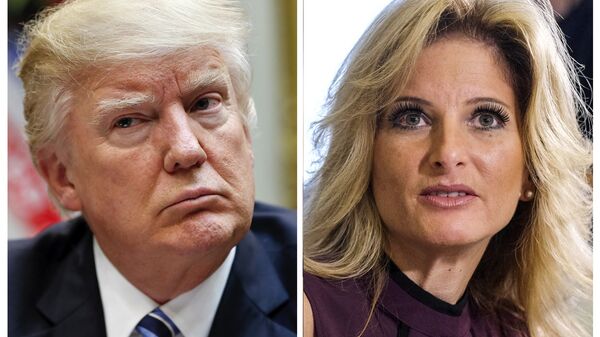 The lawyers of Summer Zervos, who accused then-presidential candidate Donald Trump of sexual misconduct, have reportedly requested all documents concerning "any woman who asserted that Donald J. Trump touched her inappropriately."

MOSCOW (Sputnik) — They subpoenaed his campaign for all documents related to the claims, local media reported Monday.

In October 2016, Apprentice TV show contestant Summer Zervos claimed at a press conference that Trump forcibly kissed and inappropriately touched her during a visit to his New York office in 2007. Trump refuted all the allegations. In January 2017, Zervos filed a lawsuit against Trump in the New York State Supreme Court.

According to the CNN broadcaster, Zervos' lawyers requested all the documents related to her, as well as all communications with her and about her, and "all documents concerning any woman who asserted that Donald J. Trump touched her inappropriately." The broadcaster noted that the subpoena was issued in March, but it has been revealed recently.

Summer Zervos has ongoing defamation suit against Trump & has subpoenaed all docs from his campaign pertaining to women assaulted by Trump pic.twitter.com/xvVjpZIDa1

​Trump's attorneys have until October 31. The White House has not commented on the issue yet.

Republican candidate Trump was elected the next president of the United States in the November 8 election. During Trump's election campaign, several women accused him of sexual harassment, with some of the cases going back decades. Trump has called the accusations completely and absolutely false, vowing to provide counter evidence and take legal action for libel.