Trump: 'No Collusion' Between Campaign and Russia 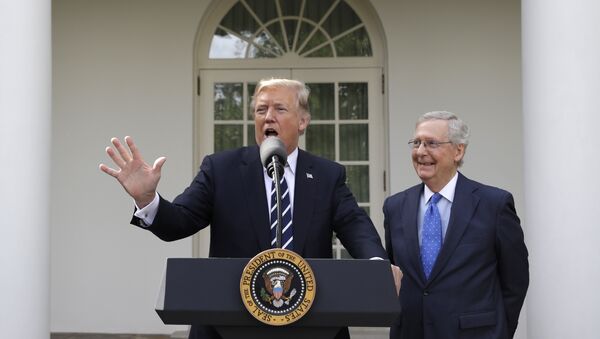 US President Donald Trump has denied that there was any collusion between his campaign and Russian actors during the election, and has called for the Department of Justice (DoJ) investigation into these alleged ties to end.

In a Monday press conference, Trump said there was "absolutely no collusion" between his presidential campaign and Moscow. As no evidence has been found, he has called for the probe to come to an end.

However, when asked if he would fire DoJ special counsel Robert Mueller (who is heading the investigation,) Trump said that he would not.

As he has said multiple times in the past, Trump called the Russia investigation just an excuse concocted by the Democratic Party as to why their candidate Hillary Clinton lost to Trump in the 2016 Presidential Election. "I'd like to see it end. The whole Russia thing was an excuse for the Democrats losing the election," Trump said. "There has been absolutely no collusion."

His explanation for why Clinton lost to him? She was a bad candidate. Trump joked that he hoped she would run against him again in 2020.

Trump also touched on numerous other issues during the press conference. One hot button issue that Trump discussed was the potential of a US withdrawal from the 2015 Iran Nuclear agreement, formally known as the Joint Comprehensive Plan of Actions (JCPOA). "Phase two might be positive and might be very negative. Maybe a total termination. That is a very real possibility," said Trump, who declared Iran noncompliant with the "spirit" of the agreement on Friday.

Congress now has 60 days to decide whether they want to remain in the JCPOA or renew the sanctions against Iran that the deal ended. Trump has previously stated that he wants to renegotiate the deal, not kill it outright.

Trump added that "we don't like" the armed conflict between the Iraqi government and Iraqi Kurdish troops in the disputed Kirkuk region. However, Trump said that the US wouldn't throw its weight behind either side of the conflict. We don't like the fact that they're clashing. We're not taking sides, but we don't like the fact that they're clashing," Trump told reporters. "We've had for many years a very good relationship with the Kurds as you know and we've also been on the side of Iraq, even though we should have never been there in the first place. We should never have been there. But we're not taking sides in that battle."

The oil-rich Iraqi city has long been disputed between Baghdad and Iraqi Kurdistan, which overwhelmingly voted to secede from Iraq in a referendum earlier in October. Iraqi troops rolled into the city as Kurdish troops retreated to avoid an armed clash- but Kurdish military leaders have called the act a "declaration of war."

The US President accused the government of Cuba of being responsible for the sonic attack against US diplomats in Havana. "I do believe Cuba is responsible. I do believe that. It is a very unusual attack as you know," he said. Bizarre reports of US diplomats hearing a deafening shrieking noise in their homes have emerged from Cuba, with the diplomats reporting symptoms like blindness, deafness, and difficult concentrating afterwards.

Cuban leaders have denied the veracity of the reports, calling them "fantasies."