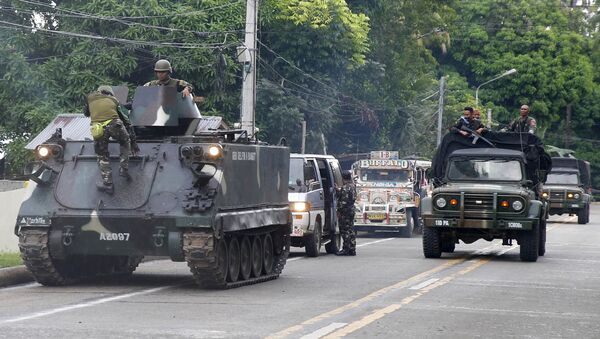 © AP Photo / Bullit Marquez
Subscribe
The elimination of two senior Daesh-affiliated terrorist leaders in Marawi will likely hasten the end of the government forces’ five-month battle for control of the troubled southern city.

A Defense Department statement issued on Monday said that the bodies of Isnilon Hapilon, the terror group's emir for Southeast Asia, and of Omarkhayam Maute, a leader of a local militant group that has pledged allegiance to Daesh, had been recovered.

Government troops also rescued 17 hostages, but more than 20 hostages are still being held by the terrorists.

He added that with Hapilon and Maute now dead, he expected an early end to the conflict.

“The implication is that the Marawi incident is nearing its end and we may announce the termination of hostilities in a couple of days,” Lorenzana noted.
Meanwhile, the Philippines’ military chief, General Eduardo Ano, said there would be no letup in the government effort to hunt down and exterminate extremist groups loyal to Daesh, adding that Marawi would be retaken within days now that the two top rebel commanders are dead.

General Ano described the successful operation to eliminate Hapilon and Maute as a “triumph of good over evil” and urged the 30 militants remaining in a shrinking combat zone to surrender and free hostages as government troops step up their offensive.

“It will be just a matter of days before it will finally be declared that Marawi has been liberated from the clutches of terrorists,” Ano told a televised news conference.

While the elimination of Hapilon and Maute may signal the final stage of the protracted standoff in Marawi between Daesh-linked militants and the government, many fear that the militants could resort to traditional types of terror attacks.

"They will not disappear. They will regroup anywhere and everywhere," President Rodrigo Duterte warned earlier this week.

"Be patient. This terrorism inspired by ISIS [Daesh] will not go away in about seven to 10 years. Terrorism is a deadly movement to confront us and our children. Your children will encounter this. It will reach your retirement age. So just be prepared for that," he said.

The ongoing armed conflict in Marawi, on the southern island of Mindanao, started on May 23, 2017 between Philippine government forces and affiliated militants of Daesh, including the Maute and Abu Sayyaf Salafi jihadist group.

Three-fourths of Marawi, a city of 200,000 on the southern island of Mindanao, has been overrun by the Islamic extremists.

Philippine Army Pursues Offensive Against Daesh-Linked Terrorists in Marawi
The terrorists seized control of a municipal jail and unshackled its prisoners, razed a hospital and took possession of at least three bridges. They are also suspected of having hunted down Christians in the Muslim-majority city to use as human shields.

In May, President Rodrigo Duterte declared martial law on the island. More than 300,000 Filipinos have been displaced by the fighting, which authorities say has killed 824 rebels, 47 civilians and 162 military.

The armed conflict has been the biggest internal security crisis the Catholic-majority Philippines has witnessed in decades.