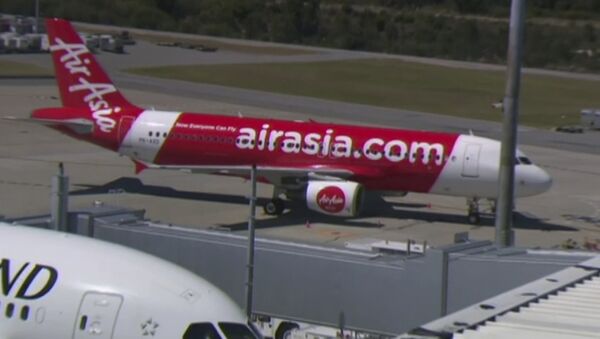 © AP Photo / Channel 9
Subscribe
Fearing for their lives, passengers aboard Flight QZ 535 were saying goodbyes to their loved ones Sunday morning when the AirAsia plane suddenly dropped 24,000 feet just minutes after takeoff.

The flight, commuting 145 passengers to Bali from Perth, was forced to make a u-turn 25 minutes after taking the skies due to "a technical issue" that caused the cabin pressure to drop, the airline said in a statement. The pilots were forced to quickly descend the plane from 34,000 feet to a mere 10,000 feet before the oxygen in passengers' gas masks ran out.

But while most would look to the flight crew for reassurance, this did not happen, unfortunately.

After landing successfully at the Perth International Airport, passengers speaking to the media began to paint a picture of shock and panic.

"The panic was escalated because of the behaviour of staff who were screaming, looked tearful and shocked," Clare Askew, a passenger on the flight told reporters at Perth Airport. "Now, I get it, but we looked to them for reassurance and we didn't get any, we were more worried because of how panicked they were."

​Askew wasn't the only one to criticize the crew's response.

"Hostesses started screaming: ‘Emergency, emergency,'" Mark Bailey told Seven Network. "They just went hysterical. There was no real panic before that, then everyone panicked."

Another passenger, fearing the worst, told the Nine News that they were preparing for the end.

"We were all pretty much saying goodbye to each other," the startled traveller told the outlet. "It was really upsetting."

#Repost from @nbcnightlynews — WATCH: Passengers were left fearing for their lives after an #Indonesia #AirAsia jet dropped nearly 24,000 feet about an hour into a flight from #Perth, Australia, to #Bali. #themostinterestingmanonradio

"We commend our pilots for landing the aircraft safely and complying with standard operating procedure," Lin Lion Tien, the head of AirAsia's safety department, told CBS News. "We are fully committed to the safety of our guests and crew and we will continue to ensure that we adhere to the highest safety standards."

Apologizing for the incident, the airline announced an investigation is underway.

"Our engineers are assessing the aircraft. All affected passengers will be scheduled to the next available flight and provided with necessary assistance including meal vouchers."

"That safety of our guests is our utmost priority, AirAsia Indonesia apologizes for any inconvenience caused," the statement added.

The plane was in the air for more than an hour before safely landing back in Australia.