Trump's Decision on Iran Reflects Compromise Between Doves and Hawks 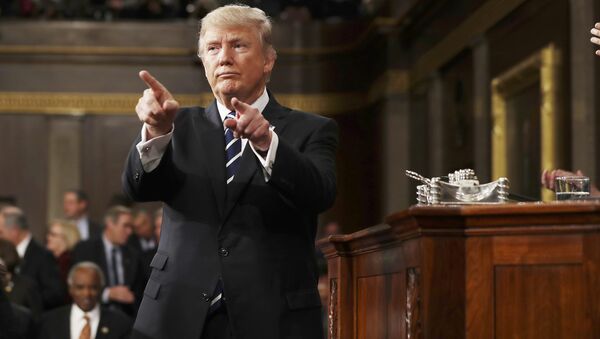 The US President Donald Trump's decision not to recertify the Iran nuclear agreement, known as the Joint Comprehensive Plan of Action (JCPOA), may be considered as a compromise between the positions of the US business circles willing to open the Iranian market and Washington's allies wishing to increase pressure on Tehran, experts told Sputnik.

Trump's stance on the multilateral accord drew a swift reaction from the international community, with European countries expressing concern and Russia voicing regret over the decision. The United Arab Emirates and Israel supported Trump's move. Despite Trump's claims that Tehran had committed multiple violations of the deal, Director General of the International Atomic Energy Agency (IAEA) Yukiya Amano said the Iranian authorities were fulfilling all the obligations they had undertaken within the JCPOA framework.

According to the experts, Trump is unlikely to cancel the deal, as other countries, as well as supporters of the deal within the US establishment, have strong determination to prevent him from doing so.

"Under domestic and international pressure, he could not run the risk of leaving the JCPOA," Professor Shen Dingli, the associate dean at the Chinese Institute of International Studies and director of the Program on Arms Control and Regional Security Studies at Fudan University, told Sputnik.

"Major companies, including US multinationals, that have a keen interest in the opening up of Iran's economy have been lobbying the White House hard to keep the deal intact. On the other hand, major US allies such as Saudi Arabia and the UAE have been pressing the White House to abandon the deal. Trump has found a compromise — allowing the deal to more or less stay intact, but personally distancing himself from what he regards as a key part of [former President Barack] Obama's legacy," Davidson told Sputnik.

The counselor of Australia’s Nuclear Threat Initiative (NTI) and former director general of the country’s Safeguards and Non-proliferation Office, John Carlson, told Sputnik that Trump's position might also be motivated by his intention to increase pressure on Iran.

"Trump has not said the US will keep the deal. Effectively he has passed this decision to Congress. He says the deal should be revised. Presumably he thinks placing the deal under threat will pressure Iran into agreeing to changes," Carlson said.

Trump's Decision to Decertify Iran Nuclear Deal to Isolate US - Iranian Lawmaker
What has changed is that Trump's aides have finally figured out a way for him to "decertify" the agreement under US law without promptly destroying it, Senior Research Associate at Martin Center for Nonproliferation Studies, Joshua Pollack, told Sputnik. "He has been personally determined to decertify it for some time," he added.

Trump's decision is more related to domestic US politics than to the substance of Iran deal, as he cannot accept the fact that what has been considered by most as a diplomatic success can be credited to the Obama administration, Marc Finaud, the senior program adviser and arms proliferation cluster leader with the Geneva Centre for Security Policy (GSCP), told Sputnik.

"Obama let Congress adopt the Iran Agreement Review Act as a price to pay to its conservative opponents and give them the power to reapply sanctions against Iran if Tehran did not comply with the agreement. So far, the IAEA has confirmed that Iran is compliant, so Trump had to find other reasons, external to the agreement," Finaud said, adding that in doing so, Trump is influenced by the pro-Saudi and pro-Israel lobbies in the United States, also described as the "neocons."

World
Swiss MP on Trump's Iran Deal Decision: Other States Think it is 'Working'
Nevertheless, the United States has no backing from other states that are parties to the agreement to renegotiate the deal, Director of Middle East Nonproliferation Program in James Martin Center for Nonproliferation Studies, Dr. Chen Kane, told Sputnik.

Indeed, the leaders of the United Kingdom, Germany and France issued a joint statement after Trump announced the policy reversal, saying they were concerned by the possible consequences of his move and urging the US Congress, which has 60 days to decide whether to reintroduce sanctions on Iran, to weigh security implications of ending the pact. Moscow said it regretted Washington's decision not to recertify the deal. UN Secretary-General Antonio Guterres also expressed hope that pact with Iran would remain in place.

Washington also does not want to be perceived as the one that walked away from the agreement without concrete Iranian violations or international support, Kane added.

"These facts constraint how far Trump may be willing to go unilaterally. Therefore, he may be able to get by not recertifying the deal and leave the next move to Congress rather than walk away from it. The problem is that decertification of the agreement while the US has no proof of Iranian violations will signal to others that the US, or at least the current administration is untrustworthy," Kane explained.

What's Next For JCPOA?

"The deal is likely to remain unrevised, but it is likely that a number of specific entities in Iran, including subsidiaries of the Iranian Revolutionary Guard Corps, will have sanctions placed on them. This, as the White House hopes, will help appease US allies such as Saudi Arabia and the UAE," Davidson said.

United Arab Emirates Supports US Strategy on Iran
So far, the Trump administration has not been able to convince other parties to the agreement that it is in their best interests to renegotiate the deal, Kane noted, adding that the cancelation of the deal contradicts security interests of Washington and its allies.

"There is no point to abandon the agreement without a practical, agreed and achievable deal to replace it. The US’ and its allies’ national security interests would be served much better if the US continue to support and implement the agreement, and in parallel, take actions to address Iran’s destabilizing activities in the region, Iran’s repressive behavior at home, its missiles program, and plan for the day after the deal ends," Kane explained.

The future of the Iran deal depends on whether the US Congress decides to uphold new sanctions against Tehran, thereby leading the United States to violate the agreement, Finaud said.

It Was US Envoy to UN Who Advised Trump to Decertify Iran Nuclear Deal - Reports
"Even the Republicans are divided on the issue, so there is no assurance that new sanctions will be voted. If they are, it does not mean necessarily that the agreement will be terminated since all the other parties want to preserve it. The US will be even more isolated and relations with its allies as well as Russia and China will deteriorate," he explained.

The United States can take a form of revenge by imposing secondary sanctions on the countries that will do business with Iran, but the European Union is prepared to resist that, Finaud added.

The deal can survive if Congress does not reimpose sanctions, as the issues raised by Trump are a matter for a further deal rather than revising the current deal, Carlson noted.

IAEA: Tehran Implements All Commitments Under Iran Nuclear Deal
"Iran might be prepared to engage in new negotiations, but Trump’s action has undermined trust, Iran could think there’s no point agreeing anything with the United States if it won't be honored," Carlson said.

Professor of Physics and Acting Co-Director of the Institute of Peace Research and Security Policy at the University of Hamburg Goetz Neuneck agreed that Tehran was unlikely to come back to talks and renegotiate the deal.

"After 10 years of stalemates and tough negotiations, this is more than unlikely. President Trump is focusing on other issues such as the support for terrorists and the moral attitude of the regime, but this is not subject to the treaty," Neuneck told Sputnik.

As no party of the JCPOA, other than the United States, could accept revision, the deal is likely to remain as it is, Shen concluded.

Contrary to Trump's claims that the JCPOA has "serious flaws," Neuneck believes the deal is well negotiated, raises and restricts the known key issues of potential military applications of a nuclear program for 10 to 15 years and contains a mechanism that can discuss and solve non-compliance.

"Even the possibility to relaunch sanctions in the case of non-compliance is included. The implementation until now went well and the IAEA has made clear that Iran is in compliance with the agreement. The other state parties of the deal, especially European leaders and the European Union clearly stated the importance of preserving the treaty," Neuneck added.

New US Strategy Seeks to 'Constrain Iran's Aggression' - White House
Pollack also does not agree with Trump that the JCPOA has serious flaws.

"It is a negotiated agreement and therefore does not simply reflect the will of one party. All such agreements are compromises. For the E3+3 [EU big three plus China, Russia, and the United States], the least desirable aspect of the deal is the limited duration of certain provisions. Unraveling the deal now will not improve upon this point," Pollack said.

Iran's representatives have made it clear that they will not reopen the JCPOA, Pollack noted.

World
Iran Will Respond Strongly to Any Actions Against Its Military Forces - State TV
"The statement of President Trump undermines the credibility of his presidency and possible that of the United States," Neuneck said, when asked whether US move undermined trust to the IAEA, which continues to certify the Tehran's compliance.

The United States has twice certified Iran's compliance with the JCPOA this year, in April and July.

US-Iran relations will continue to be business-led, with companies such as Boeing committed and keen to keep pursuing opportunities in what they regard as one of the world's last great untapped markets, Davidson said.

"Heckling from the White House will continue, but will be likely aimed at appeasing Arab allies rather than actually pushing for a serious dismantling of the deal," he added.

Rouhani: Iran to Respond in Kind if Its Interests Under Nuclear Deal Harmed - TV
Trump's inflammatory rhetoric against Tehran and threats to jeopardize the JCPOA will continue to strengthen the forces within Iran that oppose the deal, domestic reforms and opening up to the West, Kane said.

"The current deal provided an opportunity for the US to engage with Iran on developing bilateral relations. Clearly threatening the deal is unhelpful to this, it plays into the hands of conservatives in Iran who say the US can never be trusted. Improving US-Iran relations might have to wait for the next US President," Carlson agreed.

The US Congress is pressed to amend the agreement, which is also difficult, Shen said. So the US executive government will abide by its international agreement, without being able to reconciling with its Congress," he added.

World
Why Trump 'Will Never Resort' to Military Confrontation With Iran
The future of relations between Tehran and Washington is far from bright under the Trump administration, Finaud warned. "The risk of escalation and further destabilization of the Middle East, with potential global consequences, are high, especially if such a crisis develops in parallel with the one on the Korean Peninsula," he said.

Trump's decision to shift responsibility to the US Congress, which now has a Republican majority, opens the door for a very risky future in the Middle East, Neuneck agreed.

"Trying to renegotiate the Iran deal is like playing with fire in a wooden barn full of hay," he concluded.

In July 2015, Iran signed the Joint Comprehensive Plan of Action (JCPOA) with the P5+1 group of nations, a group of five permanent members of the UN Security Council — China, France, Russia, the United Kingdom, the United States — plus Germany. The nuclear deal came into force in January 2016, and provides for the gradual lifting of economic and diplomatic sanctions imposed on Tehran by Western countries in exchange for closing Iran's nuclear program.