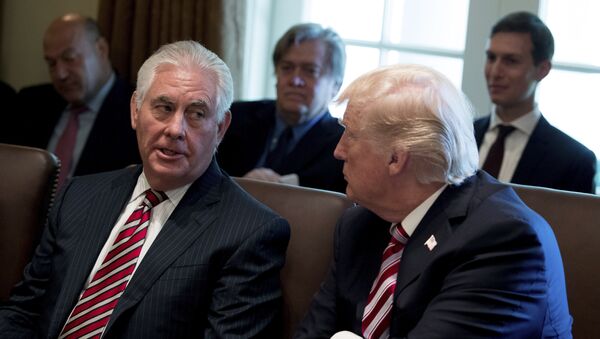 US Secretary of State Rex Tillerson has commented on Washington's stance on the North Korean issue and the Iranian nuclear deal after Donald Trump's decision not to certify Tehran's compliance with the agreement.

The US will continue diplomatic efforts to resolve the North Korean crisis, US Secretary of State Rex Tillerson said in an interview with CNN.

"He [Trump] wants this solved diplomatically he is not seeking to go to war… The diplomatic efforts will continue until the first bomb drops," Tillerson said in an interview to "State of the Union."

Tillerson said that Trump doesn't consider diplomacy a waste of time with regard to North Korea. Trump "has also made clear to me that he wants this solved diplomatically," Tillerson reiterated.

He said that Trump "is not seeking to go to war" with North Korea.

The statement comes after the US president took to Twitter to say that Tillerson is "wasting his time trying to negotiate with Little Rocket Man," adding that "we'll do what has to be done," prompting speculations of an upcoming military response to the North Korean issue.

Later, Trump wrote that "only one thing will work" with regard to Pyongyang as "talking to North Korea for 25 years, agreements made and massive amounts of money paid hasn't worked."

This week another top US official, Secretary of Defense James Mattis also reiterated that the US still resorts to diplomacy toward North Korea, adding, however, that the US army must ensure that the country has military options in case talks fail. He also said that the UN Security Council twice in a row voted unanimously in favor of imposing stronger sanctions on Pyongyang over its ballistic and nuclear missile launches.

N Korea Threatens to Strike Guam if Trump Doesn't Reign in His Twitter Flaunting
On September 11, the UN Security Council unanimously adopted its toughest resolution yet against North Korea over its latest nuclear test and repeated missile launches. The move prompted harsh criticism from Pyongyang which subsequently vowed to use any means possible to retaliate against the United States.

The tensions on the Korean Peninsula have been further aggravated in recent months as Pyongyang has held several rounds of missile launches and nuclear tests. The most recent one was conducted on September 15, when North Korea launched a ballistic missile, which flew over Japan before falling into the northern Pacific some 20 minutes after the launch.

Commenting on Trump's decision not to certify Iran's compliance with the nuclear deal, Tillerson said that Washington would work on Iran nuclear deal with other parties.

Washington wants to fully enforce the Iran nuclear deal as it is and "then begin the process of addressing the flaws," Tillerson said, emphasizing that the agreement is in the best interest of the United States.

On Friday, Trump decided not to certify the Iran nuclear deal on Friday as part of the new US strategy, prompting Tehran's statements, saying that the country would respond if its interests under the agreement are harmed. The US leader also ordered the Department of the Treasury to impose new sanctions against the Iran Revolutionary Guard Corps (IRGC) for allegedly providing assistance to terrorist groups, a claim denied by the elite Iranian forces and official Tehran.

Trump Shows He Doesn't Abide by Int'l Agreements - Iranian Parl't Speaker
In his turn, Iranian President Hassan Rouhani reiterated that the country uses weapons and missiles only as means of defense. The same day, Director General of the IAEA Yukiya Amano confirmed that the Iranian authorities are fulfilling all obligations they have undertaken within the framework of the Joint Comprehensive Action Plan (JCPOA).

After Trump's announcement, many members of the P5+1 group that brokered the historic deal in 2015 yet again stated that they believe Iran is in compliance with the nuclear deal. Commenting on Washington's move, Moscow said that Russia remains committed to the deal, is interested in preserving it and calls on all other participants of the agreement to do the same.