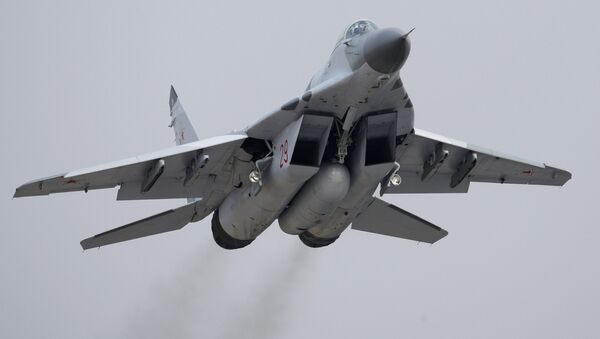 © Sputnik / Anton Denisov
/
Go to the mediabank
Subscribe
International
India
Africa
The Peruvian Air Force is reviewing the possibility of buying the latest modification of the Russian MiG-29 jet fighter, the 4++ generation MiG-29M2. There are some important advantages that a country can gain from military cooperation with Russia.

According to Peruvian military analyst Martín Manco, an arms contract with the United States would risk becoming a serious headache for a Latin American country in the long-run.

"When you buy American-made weapons and then later you have some differences with the US, Washington will refuse to sell necessary parts and provide maintenance assistance. Of course, your planes would stay grounded," Manco said in an interview with Sputnik Mundo.

According to the experts, such an unwanted scenario can be ruled out when military cooperation with Russia is concerned.

"Russia will not stop delivering repair parts and providing maintenance assistance. Our planes will fly. This is the main advantage of buying weapons from a country with which there is no conflict of interests or immediate subordination," the expert pointed out.

King of the Skies: Russia Starts Delivering MiG-29 Warplanes to Serbia
According to Manco, for the Peruvian Air Force, one of the most important points of a jet fighter deal is the transfer of technology, so that domestic specialists are able to do repairs and adjust the aircraft in accordance with a country’s military needs.

The Peruvian military already operates a fleet of MiG-29 jets. Between 2008 and 2015, the Russian company modernized eight aircraft of the country’s air force. Peru, however, remains interested in buying the latest modification of the warplane.

Russia
Russia Hopes for New MiG-29 Fighter Jets' Supplies to Columbia, Peru – Official
During talks with the Peruvian delegation, MiG Corporation CEO Ilya Tarasenko said that the company is interested in expanding into the Latin American market. The company also discussed with the Peruvian Air Force the modernization of another batch of MiG-29 jets to keep them in service for another 15 years.

The MiG-29M2 is a 4++ generation fighter jet with an improved operational range and an increased weapon payload. The aircraft can reach a maximum speed of 2,100 km/h (1,304 mph). It can carry different types of munitions, including guided air-to-air and air-to-surface missiles, guided aviation bombs and a 30-mm cannon. The MiG-29M2 can attack aerial targets as well as moving or static ground targets.