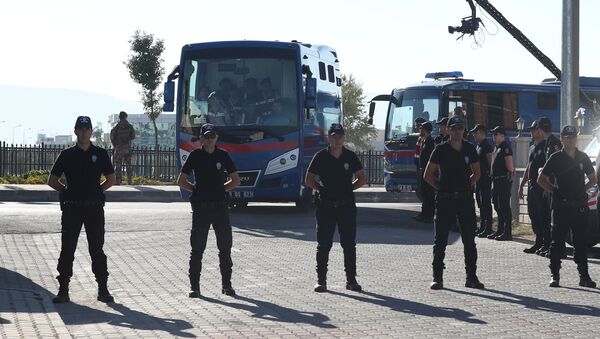 © REUTERS / Osman Orsal
Subscribe
Over 600 high-ranking Turkish officials, including diplomats, have asked for asylum in Germany since the coup attempt last year amid ongoing purges in the country.

MOSCOW (Sputnik) — According to the data obtained by the German Funke media group from the country's Interior Ministry, a total of 250 diplomats and 380 officials have asked for asylum through mid-September 2017.

A failed military coup attempt took place in Turkey in July 2016. Over 240 people were killed, while nearly 2,200 people were wounded. Ankara accuses the movement of Islamic cleric Fethullah Gulen, referred to as the Fethullah Terrorist Organization (FETO), of masterminding the coup, and has arrested thousands of military personnel, activists and journalists over suspected links to Gulen, who has been living in the United States since 1999. The cleric has repeatedly refuted all allegations.

Following the coup attempt, relations between Germany and Turkey have witnessed a setback, as Ankara believes Berlin was providing asylum for coup plotters, while Berlin has been criticizing the detention of German journalists and human rights activists in Turkey.