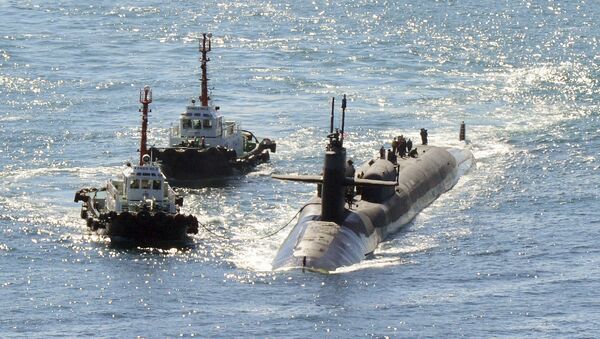 © AP Photo / Ha Kyung-min/Newsis
Subscribe
International
India
Africa
The USS Michigan, a nuclear-powered US submarine, has arrived in the South Korean port of Busan amid the ongoing escalation of tensions on the Korean Peninsula. According to military expert Dmitry Litovkin, the goal of this submarine is to put extreme pressure on North Korea.

The 18,000-metric ton USS Michigan is equipped with 154 Tomahawk missiles that are capable of hitting targets that are up to 1,400 miles away. Its arrival to the port of Busan was reported by the naval forces stationed in South Korea on their official Facebook page.

The presence of a warship equipped with Tomahawks, near North Korea, is a serious challenge to Pyongyang, military expert and captain of the 3rd rank reserve Dmitry Litovkin said in an interview with Radio Sputnik.

“The goals, in my opinion, are quite obvious: to apply forceful pressure on North Korea, with whom Washington is currently in a tense relationship. These cruise missiles among other things can carry nuclear warheads and are capable of hitting targets at a very long distance. Such weapons near North Korea are a quite serious challenge to the North Korean regime,” Litovkin said.

Asia
‘Closer to the Trigger’: North Korea Renews Promise to Bomb Guam if Attacked
The USS Michigan, an Ohio-class nuclear-powered submarine, is one of the 18 subs active with the US Navy that can be armed with 24 Trident I and Trident II ballistic missiles. Each Trident I can carry up to eight 100-kiloton warheads, while the Trident II carries 14, or eight warheads capable of frightening 475-kiloton detonations. For comparison's sake, the bomb that devastated Hiroshima, Japan, in 1945 delivered only a 12-18 kiloton blast.

In the most recent case on September 15, North Korea launched a ballistic missile, which flew over Japan before falling into the northern Pacific some 20 minutes after the launch.

During the course of the escalating crisis, North Korea has been trading threats with Washington. In his first-ever address to the United Nations General Assembly, US President Donald Trump threatened to "totally destroy" North Korea if forced to defend the United States or its allies.

Most recently, Pyongyang rattled its “sword of justice” Friday by vowing to attack the US territory of Guam with a “salvo of missiles,” one day after stating that it will complete its nuclear weapons program no matter how much international pressure the nation faces.