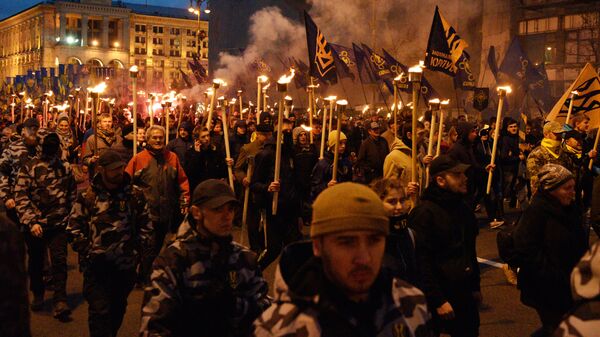 Thousands of Ukrainian nationalists in Kiev participated in a march on Saturday to mark the 75th anniversary of the creation of the nationalist Ukrainian Insurgent Army (UPA).

KIEV (Sputnik) — The march of Ukrainian nationalists in Kiev gathered about 10,000 participants and no violations have been registered during the event, the police department of the Ukrainian capital said in a Saturday statement.

"The participants started gathering at the park named after [poet] Taras Shevchenko according to rough estimates about 10,000 people have joined the march," the statement said.

The statement added citing the head of the department that about 4,500 police officers and representatives of the country's National Guard ensured order during the march.

Smaller rallies were also reportedly held in other Ukrainian cities on Saturday.

The UPA was created in 1942 and acted mostly in western Ukraine fighting against Soviet troops and cooperating with Nazi Germany.