HRW Accuses Rwanda of ‘Systematic Use of Torture’ Against Suspected Militants 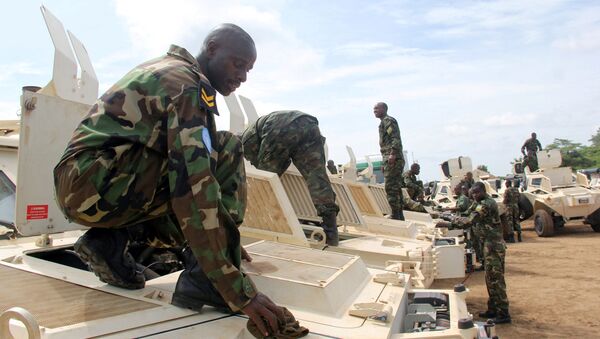 © REUTERS / Samir Bol
Subscribe
Human Rights Watch (HRW) has accused the Rwandan military of a widespread and systematic campaign of torture that includes beating, choking, electric shocks and mock executions in a 91-page report that was published on Tuesday.

The report, entitled "'We Will Force You to Confess': Torture and Unlawful Military Detention in Rwanda," discusses over 100 cases of unlawful military detention and torture from 2010 onward, ignored by the judiciary and legislature.

"Research over a number of years demonstrates that military officials in Rwanda can use torture whenever they please," said Ida Sawyer, Central Africa director at Human Rights Watch. "Impunity for unlawful detention and the systematic use of torture has led many victims to give up all hope for justice."

"The Rwandan government has every right to protect its citizens from armed groups like the FDLR [Democratic Forces for the Liberation of Rwanda], but allowing the military to commit heinous crimes only creates mistrust in the government."

The Rwandan government has denied allegations of secret military camps and torture in the past. In March 2016, Rwandan Justice Minister Johnston Busingye told the UN Human Rights Committee that "no interrogation of suspects is carried out" and "no people are imprisoned" at the Kami military camp, one of the sites named by HRW as an illegal military prison.

"[When we arrived] at Kami, I was still blindfolded," one former detainee told HRW. "They told me to lie on the ground. Two soldiers stood on me, one on my head and one on my feet. They stood on me and beat me. Then they made me curl up into a ball, tied me up, and pulled my legs and arms. They did this for hours and kept telling me to confess."

Most of the victims of the abuse, according to HRW, were those believed to be associated with the FDLR. The group is comprised of ethnic Hutus, whose traditional rivalry with the Tutsi people, greatly exacerbated by Belgian colonial rule, has led to multiple wars and genocides in the latter half of the 20th century.

Most recently, the Rwandan Civil War and Genocide of 1994 saw 500,000 to 1 million Tutsis butchered by the Hutu-majority government's Rwandan Armed Forces (FAR). Some members of the FDLR were FAR members who helped perpetrate this massacre. The FLDR continues to operate in Rwanda and the neighboring Democratic Republic of the Congo, where they fled after being ousted from power at the end of the genocide. Their greatest period of activity since the civil war was in 2009, where they killed hundreds of Congolese civilians over dozens of attacks.

FAR was eventually defeated by the Tutsi Rwandan Patriotic Front (FPR), which remains in control of the country to this day. The FPR leader, Paul Kagame, has been president since 2000. Conditions in the country have significantly improved under Kagame, with much greater political stability, healthy economic growth and drastically improved life expectancy. However, there is still significant tension between the Hutu majority — 85 percent of the population — and the Tutsi-controlled FPR.

Kagame has also been accused of undemocratically threatening his political opponents into submission. On Friday, the family of one-time Rwandan presidential hopeful Diane Rwigara said they were denied food and kept in solitary confinement by Rwandan police. Rwigara, a frequent critic of Kagame, has accused him of civil rights violations and in May announced her intention to run against Kagame in the August 2016 presidential election.

The National Electoral Commission disqualified Rwigara and two other candidates from running, saying that she had forged signatures on her presidential bid petition. Rwigara denied the charge, and the act was criticized by human rights group as well as the US and EU. Kagame won the election with 98.8 percent of the vote.

Rwigara, as well as her mother and sister, were arrested in late August on charges of forgery and inciting insurrection.