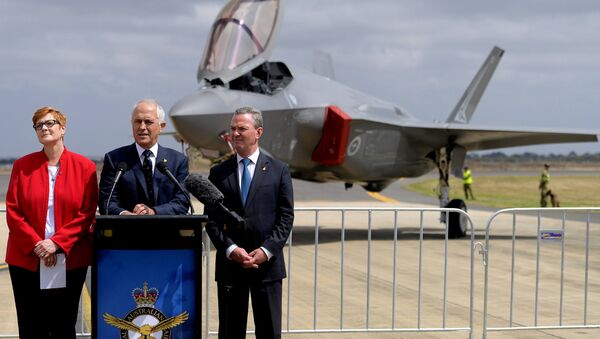 © REUTERS / AAP/Tracey Nearmy
Subscribe
Imagine footing the bill for a $17 billion weapons program touted as a “flying computer” by Lockheed Martin executives and then learning 30 gigabytes of information was stolen from that program – but hey, at least a foreign government says the compromised data was non-classified information.

That's something like what Australian taxpayers must be feeling right now, because that's the exact sequence of events that unfolded over the past 48 hours.

"The F-35 Joint Program Office is aware of this supplier cyber breach that compromised non-classified data in the summer of 2016," US F-35 JPO spokesman Joe DellaVedova said Friday.

Of course, once information does hit the public, however that happens, it's by definition not classified.

And then imagine the government saying it's a "stretch" to say the breach was their fault, as the Australian Federal Government did on Thursday, according to the Australian Broadcasting Corporation (ABC).

The CIA's electronic reading room gives a definition of Classified National Security Information, enumerating dozens of conditions that must be met in order for information to be called "classified" — one of them is that the information is "owned by, produced by, or is under the control of the United States Government."

In this case, it is not at all obvious that the information robbed from an Australian contractor belonged, in whole or in part, to the US government. The Australian Cyber Security Centre's 2017 report did not describe the contractor by name, saying only that it was a small Australian defense company "with contracting links to national security project."

The F-35 program is arguably the most disastrous government acquisition program in history — and JSF's $1.5 trillion program cost for US taxpayers makes it definitely the most expensive weapons program in world history.

Yes, this is the same F-35 Joint Strike Fighter Program that was not allowed to fly following an airshow in Melbourne because officials did not want to take the risk of having the plane fly through thunderstorms, which were predicted around where the jet was supposed to land further north in Queensland.

The Australian government is downplaying this particular theft of masses of data on the F-35 program, but the truth is that F-35 data theft has been a thorn in the monstrously expensive program's side for years.

"I'm not at all confident that our unclassified information is well protected," US Defense Acquisitions head Frank Kendall said during a 2013 Senate hearing. "A lot of that [unclassified info] is being stolen right now and it's a major problem for us," Kendall added in the same hearing, without disclosing when the thefts had occurred.

Whistleblower and former US National Security Agency (NSA) contractor Edward Snowden sent documents to German newspaper Der Spiegel in January 2015 indicating that Chinese hackers made off with 50 terabytes of data on the fifth-generation jet, RT reported at the time.

Thirty gigabytes of stolen F-35 data is mere peanuts compared to previous data losses: the hack Snowden made public was about 1,666 times greater than the theft of information in Australia, according to data published by RT. The 50 terabyte hack is roughly three times more information than all the data in the US Library of Congress — 15 terabytes.

By comparison, Twitter required 20 terabytes of storage to back up every tweet created between the company's 2006 inception and 2011, according to the US Library of Congress.