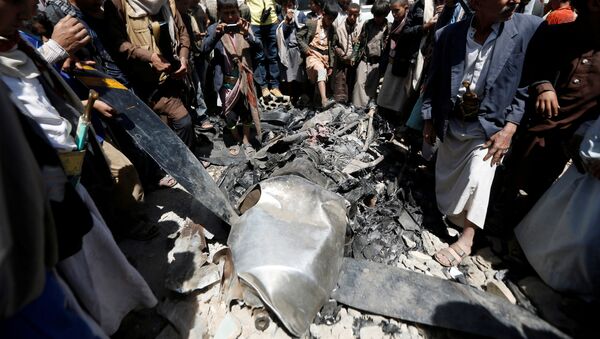 © REUTERS / Khaled Abdullah
Subscribe
International
India
Africa
Citing human rights concerns, a bipartisan committee in the US House of Representatives has called for the US military to stop lending support to the Saudi Arabia's operation in Yemen.

The primary way the US has supported the Saudi-led coalition's operation has been refueling missions flown by the US Air Force that allow their Saudi counterparts to continue a campaign of airstrikes in their southern neighbor. The new bill, House Congressional Resolution 81, would bar the US military from participating in any military action, including support for any side, in the Yemeni Civil War except operations against the powerful Islamic militant group al-Qaeda in the Arabian Peninsula (AQAP).

Trump's First Kill: Why the Deadly US SEAL Mission in Yemen Failed
The bill has attracted 30 House co-sponsors, including Mark Pocan (D-Wisconsin), as well as prominent Republicans such as Walter Jones (R-North Carolina) and Thomas Massie (R-Kentucky), Khanna's co-sponsor. Congress has not authorized any US military action in Yemen against anyone but AQAP.

The US has flown a reported 2,363 refueling sorties in East Africa as part of Operation Enduring Freedom — Horn of Africa, a military operation to support African and Middle Eastern countries in their battles against Islamic militant groups such as Daesh, al-Shabaab, and al-Qaeda. These missions have offloaded 80 million pounds of fuel to 10,400 aircraft since April 2015.

A statement from Air Forces Central Command (AFCENT) spokesman Capt. Jose Davis said that USAF does "not have the ability to break out this data just for the Saudi coalition jets in Yemen because our database does not break down details on each receiv[ing aircraft]."

"Yes, we still provide tankers. Yes, we still have airmen in the Saudi [air operations center]. But I want to be very clear on this: We do not provide [or] advise on targeting," Harrigan said at the Air Force Association's annual Air, Space and Cyber Conference.

"What we have those airmen doing down there is basically assuring that any sorties that we would have in and around Yemen are deconflicted from what the Saudi-led coalition is flying."

Against AQAP, the US is willing to use military force — including, on two occasions since the civil war began, putting boots on the ground. The January Yakla raid was a disaster, killing dozens of civilians as well as one US Navy SEAL, for no tangible intelligence gains. The May Al Hathla raid was quiet but more successful, reportedly killing seven AQAP militants in a training camp.