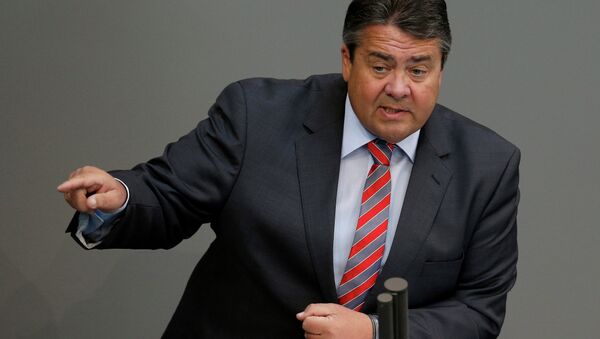 The German foreign minister said Friday that Berlin would try to persuade the US Congress to keep the Joint Comprehensive Plan of Action (JCPOA).

BERLIN(Sputnik) — Sigmar Gabriel added that Berlin was critical of Iran's positions on some issues because of its "complicated role" in the Middle East and stressed the need for the "direct and harsh" conversation.

"We support this agreement with Iran, we want this agreement to be maintained… It should not so happen that the only beacon of hope that we now have in the world, which signifies that a country may be persuaded to stop developing nuclear arms, that this signal is put off. That is why in the coming weeks we will do everything possible to persuade US Congress to keep the deal and to discuss what can be done to have Iran change its position on some other issues regarding the politics in the Middle East," the minister said, as aired by the N-TV broadcaster.

The statement comes after, earlier in the day, US President Donald Trump said that he would not certify Iran's compliance with the Joint Comprehensive Plan of Action in front of the US Congress.

Trump has said that Iran has repeatedly violated the terms of the agreement, adding that the deal would be terminated if the US Congress and other parties to the deal, including not only Iran but also China, France, Russia, United Kingdom and Germany, failed to find the solution.