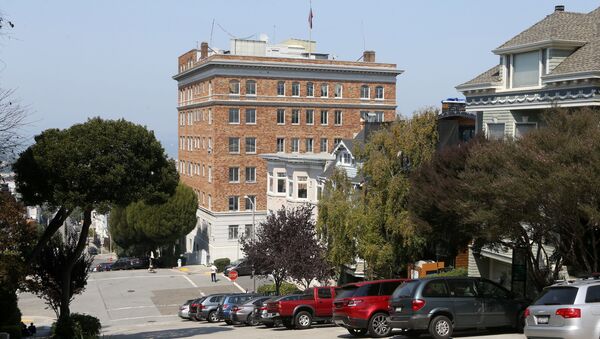 © REUTERS / Beck Diefenbach
Subscribe
International
India
Africa
The US Department of State explained the removal of the Russian flags from the buildings of the closed Russian diplomatic properties in the United States.

WASHINGTON (Sputnik) — Russian flags were "respectfully" lowered by US officials at former Russian properties in Washington, DC and San Francisco, when the buildings were closed, a US Department of State official told Sputnik.

World
Russia May Demand Further Reduction of US Diplomatic Staff, Close Consulate Gen.
A third Russian government property in New York was a suite in commercial building and did not have a flag, the State Department official added.

Earlier in the day, the Russian embassy in the United States confirmed with Sputnik that flags had been removed from the Russian Trade Representation in Washington, DC.

The Russian embassy in Washington, DC said that Russia strongly opposes the US move to take down Russian flags from its ceased diplomatic properties in San Francisco, and sent a protest note.