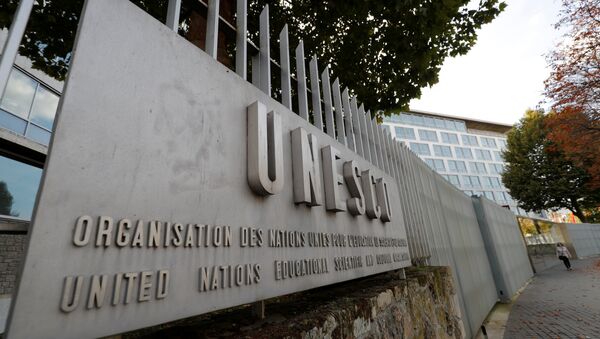 The United States has announced that it will withdraw from UNESCO at the end of 2018, citing a need for reform and an anti-Israel bias in the organization, State Department spokesperson Heather Nauert said in a statement on Thursday.

"On October 12, 2017, the Department of State notified UNESCO Director-General Irina Bokova of the US decision to withdraw from the organization … This decision was not taken lightly, and reflects US concerns with mounting arrears at UNESCO, the need for fundamental reform in the organization, and continuing anti-Israel bias at UNESCO," Nauert said, adding that the decision would take effect on December 31, 2018.

Today, US notified @UNESCO Director-General @IrinaBokova of the US decision to withdraw from the organization. https://t.co/JA9WirHMLE

​​UNESCO (UN Educational, Scientific and Cultural Organization) head Irina Bokova has said the organization had received an official notification from Washington that the United States will withdraw from the organization. She called Washington's step a "loss to multilateralism."

"I wish to express profound regret at the decision of the United States of America to withdraw from UNESCO," Bokova said in a statement, adding that the organization's relations with the United States were based on shared values.

In her statement, Bokova said the US' cooperation with UNESCO is highly important as the world is facing rising terrorism, antisemitism, and violations of freedom.

I deeply regret the decision of the United States of America to withdraw from @UNESCO.
Official statement: https://t.co/ACgqUKVLBi pic.twitter.com/xHTvJNt6tm

​The US has a long history of contradictions with UNESCO, an international body that is aimed at promoting a respect for the rule of law and human rights through cultural and scientific collaboration.

The United States pulled out of UNESCO in 1983 under President Ronald Reagan but rejoined the body in 2003 when President George W. Bush was in power.

Washington has also protested against UNESCO's decision to grant full membership to Palestine, deciding to suspend regular payments to the organization in 2011.

UN Rights Expert Accuses Israel of Human Rights Violations
Israel's relations with the UN cultural body have been deteriorating over the recent months. Israel has reduced payments from the funds that the country annually transfers to the United Nations in response to a ruling in UNESCO, which labeled Israel an occupant country of East Jerusalem.

Earlier in May, UNESCO's executive committee passed a resolution on Israel, referring to the country in the document as "the occupying power," slamming the nation's activity in the Gaza Strip and Jerusalem. The paper was supported by 22 UN states, including Russia, China, and Sweden. The United States was among ten countries that voted against the document.

Israel has been long engaged in internationally condemned construction activities in East Jerusalem, a part of the city of Tel Aviv annexed from the West Bank territories as a result of 1967 Six-day war with Arab states. Israel has declared the whole city of Jerusalem as the capital of Jewish state.