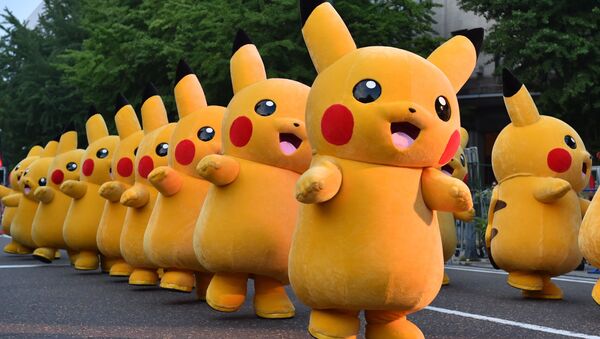 © AFP 2023 / KAZUHIRO NOGI
Subscribe
International
India
Africa
In a report as explosive as a Golem using Self Destruct, CNN has accused Russian agents of using Pokémon Go to “exploit racial tensions and sow discord among Americans.” The only issue with their allegations is that they’re about as flawed and wishy-washy as one of Team Rocket’s myriad plans to capture Pikachu.

"Don't Shoot Us," an organization whose website claims its purpose is to "improve the situation in the US and the lives of its citizens" by posting "recent videos of outrageous police misconducts," is the target of the latest CNN Hex Maniac hunt. Supposedly, Don't Shoot Us capitalized on the Pokémania of summer 2016 by encouraging players to use the game to spread awareness of police brutality.

The campaign was pretty simple. Pokémon Go has "gyms," locations where players can battle their Pokémon and receive in-game rewards for victory. Don't Shoot Us encouraged players to claim gyms close to police crime scenes with Pokémon bearing nicknames of "US police brutality victims." Then screenshot it, email it to Don't Shoot Us, and become eligible for an Amazon Gift Card.

If this was an attempt at election interference, it was a pretty shoddy one. For starters, players cannot see the nicknames other players give their Pokémon. Secondly, Pokémon Go has virtually no social features, so the screenshots couldn't even be shared in-game. CNN also admitted that they had no evidence anyone actually entered the contest.

"It is important to note that Pokémon GO, as a platform, was not and cannot be used to share information between users in the app so our platform was in no way being used," Pokémon Go developer Niantic told CNN. "This 'contest' required people to take screen shots from their phone and share over other social networks, not within our game. Niantic will consider our response as we learn more."

CNN has attempted to link Don't Shoot Us to Russia. They say that a "source familiar with the matter" told CNN that the Don't Shoot Us Facebook page was determined by Facebook to be linked to the Internet Research Agency (IRA), the Russian company accused of being an information warfare weapon of the Kremlin.

The report goes on to breathlessly state that they could not find anyone of the same name as the person who registered the Don't Shoot Us website living in Illinois, the state where the website was registered. O'Sullivan and Byers don't seem to be aware of the notion of an "online pseudonym."

They also discuss a few times that Don't Shoot Us attempted to organize protests in places like Minnesota and Maryland, outside their usual stomping grounds. Somehow this, too, is proof of Russian interference. Either someone at CNN is a master detective like Sherlock Holmes (or Detective Pikachu) and can see connections we can't, or something is missing here.

The final, most "damning" evidence that CNN can offer is that Daniel Reed, Don't Shoot Us' self-avowed "Chief Editor," gave an interview to the now-defunct International Press Foundation (IPF). CNN claims that the IPF contributor who interviewed Redd received a four-page Microsoft Word document of his answers to various questions. The document was in perfect English, but the document's metadata included a single Russian word: "Название", which means "Name."

"Two cybersecurity experts who reviewed the document's metadata told CNN that it was likely created on a computer or a program running Russian as its primary language," CNN reported. This is decisive, obviously. You'd have to be slow as a Slowpoke to not instantly conclude that the entire organization was a Russian instrument from one Russian word in the document's metadata.

So to sum up, CNN has accused Russia of using a mobile game to influence the results of the 2016 presidential election. Their evidence of this is that a Black Lives Matter affiliate used that mobile game as part of a contest to publicize police violence. This same BLM group was banned from Facebook sometime in late 2016 and a single Russian word appeared in an interview document from the group's alleged founder.

Unless CNN's Butterfree has used Confusion on the Sputnik news office, that is literally all the evidence they have presented to support the charge that those nefarious Russians used Pokémon Go to help rig the US election.

An alternative explanation? Blind Russophobia, propping up false narratives and demonizing Moscow instead of simply accepting the fact that their preferred candidate Hillary Clinton (who they gave a 91 percent chance of winning) lost to Donald Trump almost a year after it happened. Maybe he just had a type advantage, or scored a critical hit?

If CNN wants to use Pokémon to support their flimsy narrative, we suggest they take this quote from Meowth in "Pokémon: The Movie" to heart. "We do have a lot in common. The same Earth, the same air, the same sky… Maybe if we started looking at what's the same instead of always looking at what's different… Well, who knows?"