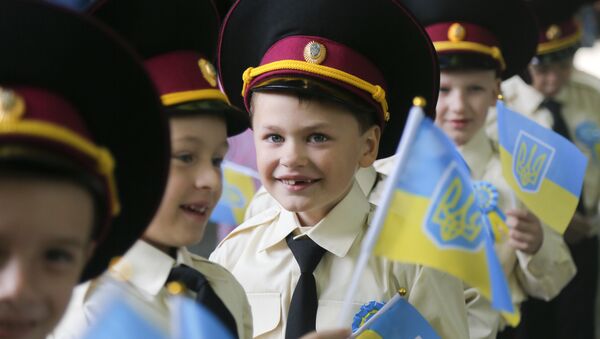 © AP Photo / Efrem Lukatsky
Subscribe
On Thursday, the Parliamentary Assembly of the Council of Europe (PACE) adopted a resolution on the new Ukrainian law on education. This controversial law has already attracted harsh criticism from Ukraine's neighboring states.

"The new Ukrainian education act does not appear to strike an appropriate balance between the official language and the languages of national minorities," the resolution read.

Out of 110 lawmakers, as many as 82 parliamentarians voted for the document with 11 against, and 17 others abstained.

On the contrary, Ukrainian Parliament consider it to be a recommendation.

"This resolution is advisory in nature… We are also going to translate the position to the Ukrainian voters that the the parliament is standing on protection of the right of all Ukraine's minorities to learn their native language and the Ukrainian language to be competitive," Iryna Herashchenko, the first deputy chairman of the Ukrainian parliament told a press conference in Strasbourg.

Hungarian Foreign Ministry Relays Hopes for Amendment to Ukraine’s Education Law
Meanwhile, under the new Ukrainian legislation, beginning on September 1, 2018, children from national minority groups will be able to study in their native language only at the primary school level, while secondary and post-secondary education will only be offered in Ukrainian. The full switch to Ukrainian-language education is set for September 1, 2020.

Russia, Romania, Moldova and Hungary, which all have diaspora communities in Ukraine, have already voiced their unhappiness with the move.

Hungary, which has a big diaspora of ethnic Hungarians in Ukraine, said the law violates the rights of ethnic minorities. Hungarians are largely concentrated in Ukraine's Zakarpattia region of Ukraine which borders Hungary. There, they form the largest local minority, at 12 percent of the population. On September 27, Russia's Federation Council lawmakers adopted a statement condemning the law.

In 2012, Ukraine's government under President Viktor Yanukovich passed a law allowing regions of the country to vote to establish Russian as a second official language and upgraded the status of more than a dozen other languages. This democratic move, which was welcomed in regions where the majority of the country spoke Russian and among Ukraine's linguistic minority groups, was condemned by nationalists. Following the February 2014 coup, it was immediately rescinded, precipitating the secession of Crimea and the Lugansk and Donetsk regions.

000000
Popular comments
An artificial Russian creation with fanatic nationalistic feelings. Like a robot that thinks it is a human.