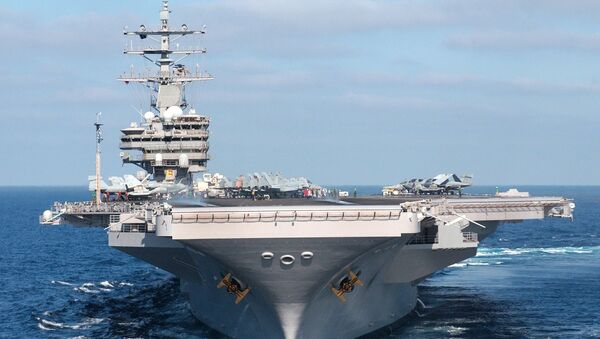 CC0 / /
Subscribe
Moscow has called on Washington to immediately reduce the intensity of rhetoric on Korean crisis, Georgiy Borisenko, Director of the North America Department at the Russian Foreign Ministry told Sputnik on Wednesday.

The comments come as the American warships, led by the Ronald Reagan aircraft carrier, head toward the North Korean coast.

"The situation is very dangerous, it worries us very much, especially because we have borders with North Korea," Georgiy Borisenko told Sputnik.

"We have repeatedly said this to the Americans, urging them to solve this problem [the Korean crisis] exclusively by political and diplomatic means. We believe that it is always possible to agree on a mutually beneficial basis to avoid catastrophic developments," the diplomat stressed.

USS Ronald Reagan Supercarrier to Conduct Exercises Off Korean Peninsula
He further noted that the US, in working contact with Russia, as well as in public rhetoric, does not rule out any options for resolving the situation around the Korean Peninsula.

"But on our part, it is constantly stressed that this is a very dangerous game, that it is necessary to immediately reduce the intensity of rhetoric, because even verbal accusations are exacerbating the situation, not to mention specific actions when naval armadas are being pulled up to the DPRK coasts," Borisenko stated.

Earlier in September, the US Navy announced that the entire USS Ronald Reagan strike group, which is comprised of four destroyers and two submarines, is set to participate in military drills alongside South Korean ships in late October.

The Pentagon then claimed that the exercises had been planned far in advance and are not a response to current tensions with Pyongyang.

North Korea nevertheless regards it as the buildup of US military presence in the area amid the escalations of tensions between the two countries over Pyongyang's missile launches and nuclear tests and subsequent war of words between them.

In his first address to the United Nations General Assembly earlier in September, US President Trump noted that the US "has great strength and patience," but threatened to "totally destroy" North Korea if his home is "forced to defend the United States or its allies."

In response to the speech, North Korean leader Kim Jong Un issued a statement, warning his opponent of the "highest level of hardline countermeasure in history."

000000
Popular comments
Cowboys are pushing all over the world: Russia in both Ukraine and Syria, Iran and Nuclear Korea. I hope Trump is not under the influence of Wall St. and military industrial complex and will not take some stupid action leading USA into a large scale war. This pressure on Nuclear Korea is just a bluff, they expect Koreans will pull back and surrender just seeing that much military power, but they will not...
me again
11 October 2017, 12:49 GMT
000000
This is open door to make fabricated provocations. Americans are very good to create provocations and blame other. Russia and China should send strong message to the Americans about defending N.K. Otherwise Americans will fabricate provocations ad start the war. Russia and China does not do anyone a favor being silence or support Americans in UN. This could back fire on Russia and China
Maxi
11 October 2017, 14:02 GMT
000000
Newsfeed
0
New firstOld first
loader
LIVE
Заголовок открываемого материала
Access to the chat has been blocked for violating the rules . You will be able to participate again through:∞. If you do not agree with the blocking, please use the feedback form
The discussion is closed. You can participate in the discussion within 24 hours after the publication of the article.
To participate in the discussion
log in or register
loader
Chats
Заголовок открываемого материала
Worldwide
InternationalEnglishEnglishMundoEspañolSpanish
Europe
DeutschlandDeutschGermanFranceFrançaisFrenchΕλλάδαΕλληνικάGreekItaliaItalianoItalianČeská republikaČeštinaCzechPolskaPolskiPolishСрбиjаСрпскиSerbianLatvijaLatviešuLatvianLietuvaLietuviųLithuanianMoldovaMoldoveneascăMoldavianБеларусьБеларускiBelarusian
Transcaucasia
ԱրմենիաՀայերենArmenianАҧсныАҧсышәалаAbkhazХуссар ИрыстонИронауОssetianსაქართველოქართულიGeorgianAzərbaycanАzərbaycancaAzerbaijani
Middle East
Sputnik عربيArabicArabicTürkiyeTürkçeTurkishSputnik ایرانPersianPersianSputnik افغانستانDariDari
Central Asia
ҚазақстанҚазақ тіліKazakhКыргызстанКыргызчаKyrgyzOʻzbekistonЎзбекчаUzbekТоҷикистонТоҷикӣTajik
East & Southeast Asia
Việt NamTiếng ViệtVietnamese日本日本語Japanese俄罗斯卫星通讯社中文（简体）Chinese (simplified)俄罗斯卫星通讯社中文（繁体）Chinese (traditional)
South America
BrasilPortuguêsPortuguese
NewsfeedBreaking
00:00 GMTIAEA Must Have Access to Nuclear Fuel for Australian Submarines - Iranian Envoy
YesterdayFDA Authorizes Pfizer Booster Shots for Elderly, At-Risk Americans
YesterdayTurkey Should Withdraw From Syria, End Occupation of Territories - Syrian Foreign Minister
YesterdayPentagon Says Aware of Reports of Poor Conditions at Military Base Housing Afghans
YesterdayUK Announces Plans to Become AI Innovation Superpower Within 10 Years
YesterdayUS Man Pleads Not Guilty to Capitol Bomb Threat After Livestreaming Police Standoff
YesterdayCroatian Police Partially Solve Mystery of Lone Woman Found on Island With No Memory
Yesterday‘Earth Looks Fragile from Space:’ Jeff Bezos Pledges $1 Billion to Tackle Climate Crisis
Yesterday‘World’s Coolest Dictator’: El Salvador’s Bukele Changes Branding on Twitter Amid Protests
YesterdayCzech, Hungarian Prime Ministers Slam EU for Poor Border Protection From Illegal Migrants
Yesterday‘We’re Done With Fear’: Florida Appoints Joseph Ladapo as State’s New Surgeon General
Yesterday'Difficult Decision': Facebook Chief Technology Officer to Step Down From Post
YesterdayGrandmothers Know Best: Cristiano Ronaldo’s Mother Believes Her Grandson is a Star in the Making
YesterdayStates to Provide Cash for Each COVID Death: Modi Gov't to Top Court
YesterdayLeaks Reveal UK Equalities Minister Dismissed Colonialism, Mocked Trans People
Yesterday'Mars' Fate Was Decided From Beginning': Study Reveals What Likely Happened to Red Planet’ Water
YesterdayNo Political Dialogue in NATO, France's Defence Minister Says Amid Submarine Contract Snub
YesterdayBarcelona Boss Ronald Koeman Storms Out of Presser Without Taking Questions
YesterdayER Doc Accuses Gov’t of ‘Shoving’ Vax Side Effects ‘Under the Mat’ in Vid Leaked to Project Veritas
YesterdayEuropean Commission Yet Undecided on AUKUS Deal Response