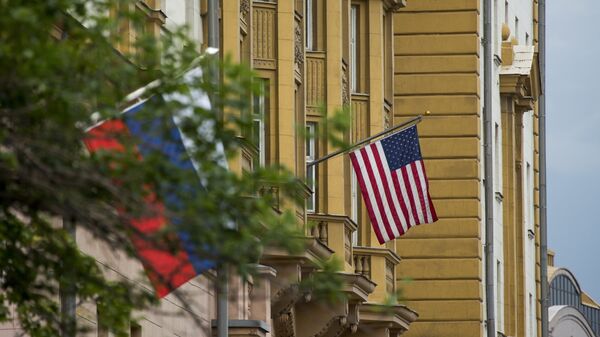 © AP Photo / Alexander Zemlianichenko
Subscribe
International
India
Africa
According to the Russian Foreign Ministry, Moscow is considering various options for responding to the seizure of Russian diplomatic property in California by the United States and has not ruled out that it will demand real parity in the number of US and Russian diplomats.

A senior Russian diplomat stated that Moscow may demand real parity in the number of US and Russian diplomats, which would entail a US diplomatic mission staff cut to 300 people or less.

"As for the response, we've said, including in public, that in diplomacy there is an inviolable principle of reciprocity, and Americans know this very well. If they behaved in this way, it means they agree that we can act in kind with their foreign institutions in Russia. With regards to specific measures, we will consider them, and if necessary, they will be applied,"  Director of the Russian Foreign Ministry's North America Department Georgiy Borisenko said in an exclusive interview.

World
Russia Claims US Raid of Its Diplomatic Premises Tantamount to 'Occupation'
Moscow has not abandoned its intention to file a lawsuit with a the US court over the situation around the Russian Consulate General in San Francisco, Director of the Russian Foreign Ministry's North America Department Georgiy Borisenko said.

"No, we have not abandoned anything at all. In line with the instruction of the Russian president, we are working actively on this. There are US lawyers who are ready to interact with us. But this is a slow process. In any case, the statute of limitations here is quite solid, so there is no hurry. We work methodically, consistently, select materials in order to maximally substantiate our lawsuit. When everything is ready, it will be filed," Borisenko said.

In early August, the United States introduced its newest package of anti-Russian sanctions; after that, Russia declared that the diplomatic presence of the United States in Russia would be reduced from 755 people to 455 to coincide with the number of consular personnel that Russia had in US.

Starting from August, the Russian Foreign Ministry suspended the access of US Embassy employees to several homes in the Moscow neighborhood of Serebryany Bor and a warehouse in response to Washington's strengthening of anti-Russian sanctions.

On September 2, at the request of US authorities, the Russian Consulate General in San Francisco and trade missions in Washington and New York were closed. After that, the buildings were searched. Washington said that this step was in response to Moscow's decision to reduce the size of the US diplomatic staff in Russia. Russia called these actions an unfriendly step and pledged to sue the US authorities over the situation.