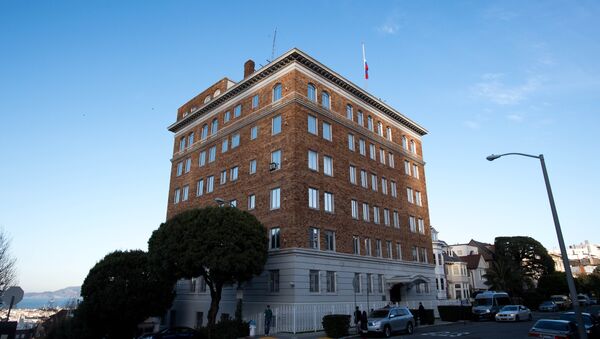 Another "shameful event" in the row over the Russian diplomatic properties in the US. This time Russian flags were removed from the buildings of the Consulate General in San Francisco and the Trade Representation in Washington, DC.

WASHINGTON (Sputnik) — Russia vehemently opposes the US move to take down Russian flags from its ceased diplomatic properties in San Francisco, the Russian embassy in Washington, DC said in a statement on Wednesday.

Moreover, the United States should never allow such events to occur in the future, the embassy stressed.

Later in the day the Russian embassy in the United States has also confirmed with Sputnik that flags have been removed from Russian Trade Representation in Washington, DC.

"We can confirm," Russian Embassy spokesman Nikolai Lakhonin told Sputnik regarding the removal of flags from the Trade Representation. 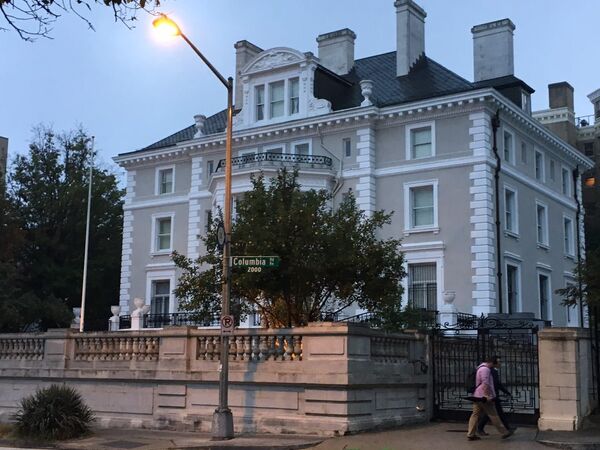 Russian flags were removed from the building of the Russian Trade Representation in Washington, DC
© Sputnik / Kristin Dailey

"The removal of Russian flags from the Russian Trade representation is a real provocation. It's an absolutely shameless and outrageous act, that doesn't fit in with any international norms," Stadnik said. "Today, there are a lot talks about IQ score in the US administration, it looks like it really needs to be checked."

Shortly after Russian flags were taken down Russian Ambassador to the United States Anatoly Antonov blamed Washington for backtracking on its commitment to repair ties with Moscow.

"Unfriendly steps by the United States run counter to the claims it made earlier about its desire to restore US-Russian relations," the diplomat was quoted as saying by the Washington Embassy on Twitter.

Antonov stressed that Russia remains committed to building a pragmatic relationship with the United States despite the fact that Washington’s actions give little hope for optimism.

"We were disappointed and saddened by this. We were and remain committed to building a pragmatic bilateral cooperation with the US. I have said time after time we are deeply convinced that such cooperation of two great powers is what the international community wants," he said.

"It is regretful that US current actions undermine this faith, this optimism. But I want to believe that official Washington will come around and make right conclusions for what we said, and our relations will normalize," Antonov said.

Antonov also pointed out that the United States alone is responsible for violating the norms for inter-state relations after its contentious decision to remove Russia’s flags.

"These buildings were essentially seized earlier by US authorities. In violation of international norms, bilateral agreements and US laws… Such steps only complicate the US-Russian dialogue. All responsibility for violating the norms for inter-state relations lies with the official Washington alone," he told the Rossiya broadcaster.

He called on Washington to stop the "systematic seizure of our properties in the US accompanied by insulting actions, raise the flags once again above the buildings owned by Russia and not to allow this to repeat itself."

In late July, Moscow directed the reduction of US diplomatic presence in Russia to 455 people. This is the same number of diplomatic personnel that Russia has had in the United States since then US President Barack Obama's ordered the expulsion of 35 Russian diplomats in December 2016.

Nauert's Comments on Searches of Russian Properties 'Mock' Situation - Embassy
Washington, in response, demanded in late August that the Russian Consulate General in San Francisco, the trade mission in Washington and its branch in New York suspend their operation from September 2.

Russian President Vladimir Putin said in September he would instruct the Foreign Ministry to go to court after the US State Department closed three Russian diplomatic facilities in retaliation for Moscow’s decision to cut US diplomatic staff in Russia.