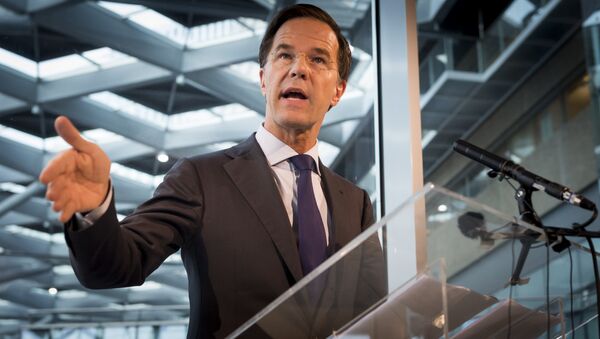 After a prolonged negotiation process, Dutch political parties have reached an agreement on a coalition government.

"The agreement on the government has finally been reached," Rutte told journalists following three-hours long discussions of the final agreement, as quoted by the NOS broadcaster.

VVD Party Wins Dutch Election Only Due to Turkish Rally Ban Ploy – Belgian Party
A total of four parties — Rutte's center-right People's Party for Freedom and Democracy (VVD), the Christian Democrats party (CDA), the left-wing liberal Democrats 66 party, and the Christian Union (CU) — took part in the negotiations, and have managed to reach an agreement after a record seven-month-long period of discussions on the most pressing issues.

Meanwhile, on March 15, Netherlands held general elections. The VVD came out first in elections, securing 33 out of 150 seats in the parliament. The far-right Dutch Party for Freedom (PVV) came in second and took 20 seats. The CDA and the liberal Democrats 66 party followed the PVV, both with 19 seats. Initially, the VVD tried to negotiate a coalition with the GreenLeft Party (GroenLinks), but the parties failed to reach a consensus on migration policy.