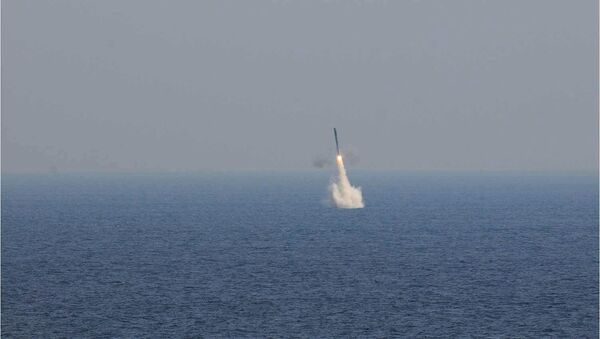 BhraMos Aerospace expects to get orders from Asian countries, including Vietnam, for the BrahMos supersonic cruise missiles that can be launched from submarines, ships, and aircraft as well as from the land.

New Delhi (Sputnik) — BrahMos Aerospace, an Indo-Russian joint venture, expects a major jump in the demand for its supersonic cruise missile in the next five years in anticipation of orders from friendly countries of the Asian region. Presently, BrahMos Aerospace is working on the order worth $7 billion placed by the three services of the Indian armed forces.

"If exports fructify, then the order for BrahMos missiles can almost double in another five years," Sudhir Kumar Mishra, CEO, BrahMos Aerospace said at a function organized by the Confederation of Indian Industries in New Delhi.

India to Put BrahMos Hypersonic Missile Into Service After Tests in Indian Ocean
BrahMos Aerospace signed contracts worth $554 million from April 2015 to August 2017. Transactions worth $615 million for the financial year 2017-18 and 2018-19 were approved considering new orders from customers and future developmental orders. The company approved the proposal in a meeting held in the last week of September.

Vietnam has been on top of the list of India’s potential clients form the BhraMos missiles. But various hurdles have kept a deal from materializing. In August this year, there were speculations in the media that India had delivered BhraMos missiles to Vietnam.

“The arms purchase is in line with Vietnam’s peaceful national defense policies aimed at protecting the country,” Le Thi Thu Hang, Vietnamese foreign ministry spokeswoman had said in August this year during a regular press briefing in a reply to a question which reads, “It has been in the international news that Vietnam just received some Brahmos missiles from India. Could you please confirm that information?” India, however, denied having delivered the BrahMos missiles to Vietnam.

BrahMos Aerospace is a joint venture between India’s state-owned defense research unit DRDO and Russia’s NPO Mashinostroyenia which was established in 1998.