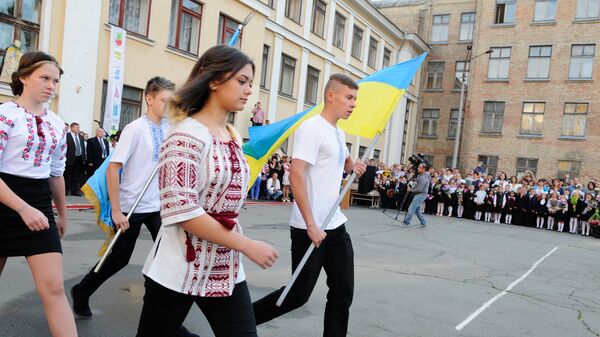 "On October 12, the PACE [Parliamentary Assembly of the Council of Europe] will express its opinion on the issue, and we hope that the law will be amended. However, despite various assessments of the law by Ukraine and Hungary, we will further help the Hungarian community in the Zakarpattia region, as well as the Zakarpattia region itself," Hungary’s Minister for Foreign Affairs and Trade Peter Szijjarto said during a Monday meeting with Zakarpattia Governor Hennadiy Moskal, as quoted by the latter’s press service in a statement.

Russia's Upper House Adopts Bill Condemning Ukraine's Education Law
Voicing opposition to the introduction of the education law by Kiev, on September 26, Szijjarto condemned the move and warned Ukraine of a harsh response to it, including the blocking of all pro-Ukrainian initiatives within the European Union.

"The issue of language, of education for the Hungarian community, is of principal importance for us; this explains Hungary’s reaction to Ukraine’s Law on Education," the diplomat explained.

Manwhile, under the new Ukrainian legislation, beginning on September 1, 2018, children from national minority groups will be able to study in their native language only at the primary school level, while secondary and post-secondary education will only be in Ukrainian. The full switch to the Ukrainian-language education is set for September 1, 2020. Hungary, which has a big diaspora of ethnic Hungarians in Ukraine, criticized the law as violating the rights of ethnic minorities. Hungarians are largely concentrated in Ukraine's Zakarpattia region, where they form the largest local minority, at 12 percent of the population. Ukraine’s educational law has been criticized not only by Hungary but also by Moldova, Romania and Russia, which also have ethnic and linguistic diasporas in the country.