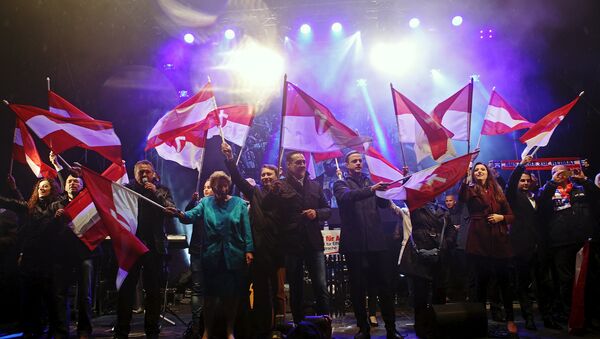 © REUTERS / Heinz-Peter Bader
Subscribe
As parliamentary elections in Austria grow closer, the nation’s Freedom Party (FPÖ) has been forced to suspend one of its members after he was accused of performing a Nazi salute.

Austria's right-wing Freedom Party (Freiheitliche Partei Österreichs) suspended a local councilor from the party from the municipality of Styria after he allegedly greeted another council member at a meeting by saying "heil Hitler" and raising his hand in a Nazi salute, according to a report by Der Standard.

"I was quite perplexed and I cannot quite explain what he wanted to tell me," the other councilor said. "Maybe he wanted to annoy me." The two were entering a room for a vote when the incident occurred.

Austria Needs to Ban Political Islam Threatening Europe - Freedom Party Head
The party, which expects the elections that come in less than a week to vault them into the country's Parliament, has responded with a written statement in which Josef Riemer, a chairman of the party for the region, explains that the membership of the unruly councilor has been suspended until the case is resolved.

According to a later report by Reuters, the FPÖ councilor has rejected the allegations and already hired a lawyer.

Accusations of Nazi sympathy have been a favorite weapon against the Freedom Party, as in Austria, possessing items or making statements that glorify Nazism is illegal.

In September, the party had to expel another member after he hung a plaque commemorating Nazi leader Adolph Hitler's annexation of Austria, complete with a quote by the Reich leader, in his pharmacy, according to Austrian news website The Local.

Markus Abzwerger, head of the party in Tyrol, responded on Facebook that the party member had been expelled, saying that a "red line had clearly been crossed."

"Every time this sort of thing happens, they [FPÖ] say it is an exception. Austrians are laughing at them each time, saying 'Oh look, another exception,'" commented Hannes Uhl, a spokesperson for the Social Democrats, according to a report by Al Jazeera. "But it's in the DNA of their party."

Once Bitten, Twice Shy: Man in a Shark Costume Caught by Austria's New Burqa Ban
According to Uhl, both the FPÖ and the conservative People's Party (ÖVP) have focused on immigrants to draw attention from other social issues.

The right wing, or at least their ideas, have become increasingly popular in Austria, so much so that a number of media outlets predict a big win for the FPÖ in these elections, earning as many as the second or third most votes in the contest behind only the People's Party, which is generally expected to take the majority of the seats.

"There is a rising populism that divides the population of Austria between Muslims and non-Muslims, foreigners and non-foreigners," said Alexander Pollak, a spokesperson for Austrian human rights group SOS Mittermensch.

This week, the group organized a symbolic vote in which more than 2,000 people without Austrian citizenship took part, an attempt to draw attention to the rising popularity of right-wing ideas, Al Jazeera reports.