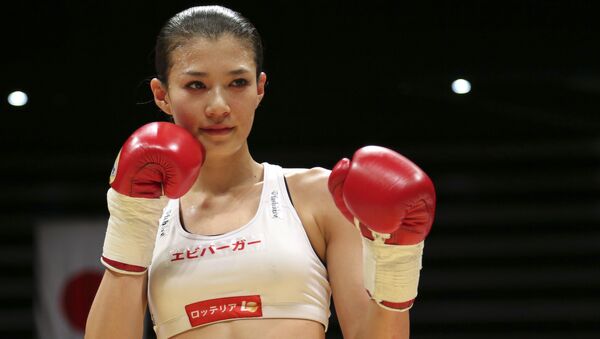 © AP Photo / Toru Takahashi
Subscribe
Tomomi Takano, a Tokyo-based model and professional boxer, has been recently steaming up Instagram with her ability to combine beauty and power.

Traditionally, boxing has been seen as a masculine sport; however, there are more and more ladies proving that this sport is not just for men, and Tomomi Takano is one of them. The 30-year-old woman from Sumida, Tokyo, Japan, has been lately catching everyone's attention online, with her Instagram account blowing up.

At first glance, this attractive, tall, slim and leggy woman doesn't look like she is involved in a combat sport, especially when she is seen outside the ring.

Originally, Tomomi started out as a model, but she moved from the catwalk to the boxing ring with ease. Now, she has totally dedicated her life to boxing, which requires her to follow a strict training schedule in order to keep her body fit and strong.

Tomomi trained kickboxing for several years in high school, but debuted as a professional in April 2013. Since then she has never stopped to impress the public with her perseverance and determination.

Meanwhile, she hasn't given up on her glamorous and feminine side: Alongside photos and videos of her training, Tomomi also stuns and amazes her subscribers with images of her jaw-dropping beauty and outstanding physique.