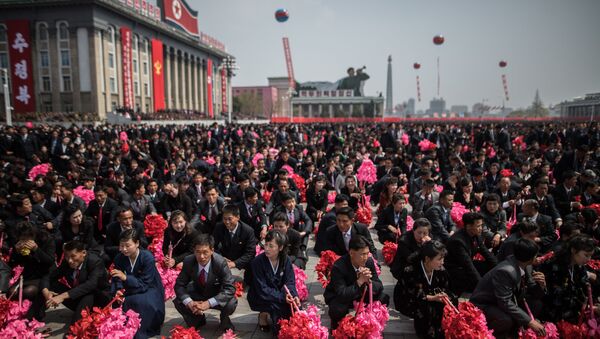 © Sputnik / Iliya Pitalev
/
Go to the photo bank
Subscribe
Moscow has repeated its call on the international community to consider the Russia-China "double freeze" plan on the settlement of the crisis on the Korean Peninsula, which has been rejected by Washington.

MOSCOW (Sputnik) – Russia's proposals on the settlement of the North Korean issue remain on the table, as does the plan which the country proposed jointly with China, Russian presidential aide Yury Ushakov said Monday.

“Our position, our calls for calm and diplomatic resolution remain on the table, as does our joint initiative with the Chinese colleagues on the issue. The president spoke of it repeatedly, he mentioned this issue,” Ushakov told reporters.

Moscow has repeatedly called for a diplomatic solution to the North Korean issue and jointly with China proposed the so-called "double freeze" plan in order to settle the situation on the Korean Peninsula. According to the plan, the DPRK should stop nuclear tests, while the US and South Korea should refrain from joint drills. Washington has already refused to implement the plan, while there was no official response from Pyongyang on the issue.

Kim Jong-un Says North Korean Nukes 'Protecting Sovereignty' Amid US 'Threats'
Earlier in the day, the Kremlin spokesman called on all interested parties to show restraint regarding the situation on the Korean Peninsula and to avoid steps that could aggravate the situation in the wake of the recent statements made by US President Donald Trump.

Last week, Trump said that US State Secretary Rex Tillerson is "wasting his time trying to negotiate with Little Rocket Man," adding that "we'll do what has to be done." Most recently, the US president said that "only one thing will work" with regard to Pyongyang as "talking to North Korea for 25 years, agreements made and massive amounts of money paid hasn't worked."

S Korea, US Allegedly Increase Surveillance of N Korea
The North Korean nuclear and missile test issue has been aggravated in recent months as Pyongyang has held several rounds of missile launches and nuclear tests. The most recent one was conducted on September 15, when North Korea launched a ballistic missile, which flew over Japan before falling into the northern Pacific some 20 minutes after the launch.

000000
Popular comments
The end of the N.Korean nuclear program in exchange for the end of US troops in S.Korea would be a great opportunity for N.Korea. After all, it is just an small economy and S.Korea could deal with a N.Korea without nuclear weapons alone.