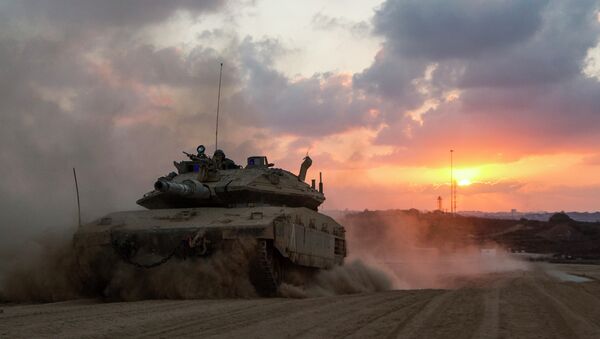 The Israel Defense Forces said that Palestinian militants from the Gaza Strip fired a rocket that exploded in southern Israel, to which they responded with destroying a Hamas outpost.

TEL AVIV (Sputnik) – Palestinian militants from the Gaza Strip fired on Sunday a rocket that exploded in southern Israel leaving no people killed or injured, the Israel Defense Forces said.

“A projectile fired from the Gaza Strip hit an open area in the Eshkol Regional Council. No injuries reported,” the IDF said via Twitter.

After the shelling, Israel opened retaliatory fire having destroyed a Hamas outpost in the southern Gaza Strip.

Suicide Blast in Gaza Kills Police Officer, Hurts Five
Israel holds the Palestinian Hamas movement, which is ruling the Gaza Strip, responsible for any attacks coming from the region.

"The IDF holds Hamas responsible for any terror activity perpetrated against Israel from the Gaza Strip," the IDF added.

Relations between Israel and Palestine have been tense for decades. Palestinians seek diplomatic recognition for their independent state on the territories of the West Bank, including East Jerusalem, which is partially occupied by Israel, and the Gaza Strip.