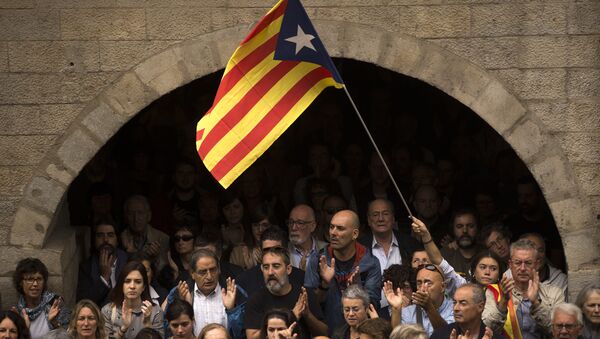 © AP Photo / Francisco Seco
Subscribe
Experts believe that Catalonia's referendum is 'the situation has already caused a serious constitutional crisis' amid no clear timeline for an independence declaration and hesitations.

MOSCOW (Sputnik) — If Catalan authorities decide to declare independence from Spain following the results of the referendum, they will hardly be able to enjoy their status as the tensions with Madrid over violation of the Spanish constitution will rise and there will be no support internationally since other states would not sacrifice their relations with Spain for Catalonia's sake, experts told Sputnik.

On October 1, Catalonia held the independence referendum, which is not recognized by the Spanish authorities. The official results of the vote showed that 90.18 percent, or more than 2.28 million voters, favored secession of Catalonia from Spain, with the turnout exceeding 43 percent. On Tuesday, the Catalan parliament is expected to hold a session, during which it might launch the process of Catalonia's secession from Spain.

Daniel Hoegger, senior policy fellow at the Swiss-based think tank Forum on Foreign Policy, believes that the declaration of the independence will probably lead to an even more tense situation between Barcelona and Madrid, which will be unlikely resolved soon because of incompatibility with Spanish laws.

"On the national level, the referendum and the consequent declaration of independence is not compatible with the current Spanish constitution. From a political point of view: The Spanish government disapproves this referendum," Hoegger said.

"The situation has already caused a serious constitutional crisis. This risks escalating further if the Catalan government declares independence and the Spanish authorities respond with more police force," Gray argued.

Since Catalan parliament passed the bill allowing independence referendum on September 4, Madrid has been vehemently trying to prevent the vote. In particular, the Spanish federal government filed a complaint with the country's Constitutional Court over the Catalan government and parliament approving the law on the independence vote. The court ruled that the plebiscite was illegal.

When the referendum day has come, Madrid ordered Spanish Civil Guard and police to prevent the voting. The authorities restricted Internet access to the websites where Catalan residents could cast a vote and attempted to close polling stations and confiscate ballot boxes, which resulted in violent clashes with the voters leaving hundreds of people injured.

Despite Madrid's efforts, Catalan authorities announced that over 90 percent of Catalans voted for independence from Spain. Spanish Prime Minister Mariano Rajoy, meanwhile, refused to recognize the fact that a referendum took place as well as its results.

On Saturday, Rajoy said that the government would resist the declaration of independence and protect the country's unity and sovereignty taking all necessary steps causing as less harm as possible to achieve these goals.

In terms of international recognition, Catalan authorities are unlikely to have a success, since other countries would be reluctant to sacrifice their relations with Madrid for the sake of Catalonia's independence, Hoegger argued.

"Other states will be hesitant to recognize Catalonia as an independent and sovereign State and this way to prioritize Catalonia's interest over the ones of Spain," the analyst said.

In Hoegger's opinion, the Catalan case is different from Kosovo's example, as, even taking into account police violence during the referendum, there were no atrocities against civilians, which would justify the recognition of Catalonia as an independent state.

"Although the degree of force and violence used by the Spanish authorities against the demonstrators is shocking and unprecedented, other States accept and recognize a "remedial secession" only as ultima ratio in case of grave atrocities against the population by their own government (as it was argued, for example, in the secession of Kosovo 2008). I doubt that other states would perceive this already as sufficient to accept a complete break by Catalonia from Spain," the analyst pointed out.

In addition, there was no official approval of Catalan referendum as in the case with the referendum in Scotland, which would allow other countries at least consider the recognition of Catalonia, Hoegger added.

Thus, although the plebiscite was in line with the international law, the international community will unlikely recognize Catalonia as a state and everything will depend on Madrid's approval or disapproval, the analyst concluded.

Caroline Gray meanwhile notes that the lack of the international support has made Catalan President Carles Puigdemont and his party doubt the decision to secede from Spain.

"At the moment he [Puigdemont] is providing no clear timeline for a unilateral independence declaration. Indeed, it is becoming clear that he and sectors of his party are hesitating as to whether to declare independence or step back," Gray said.

If Puigdemont eventually makes a declaration of independence, it would not be recognized by Madrid or Brussels since it would be illegal under Spanish law, the lecturer pointed out.

"The EU’s refusal to mediate makes it impossible for the Catalan government to secede unilaterally," Gray added.

On Monday, the European Commission said in an official statement that Catalan referendum was "an internal matter for Spain that has to be dealt with in line with the constitutional order of Spain." Thus, alienating itself from solving this issue.

Way out of Crisis

Despite major disagreements between the two sides, the experts believe that the crisis can still be settled peacefully.

Caroline Gray is convinced that there is still time for a political solution, "if both sides take a step back from the brink."

The analyst of the Swiss-based Forum on Foreign Policy suggested that Barcelona and Madrid could sign an agreement, for example, based on Switzerland's confederation model, and mitigate the current tensions.

"The only way to solve this, in my view, is to come together and negotiate a deal (maybe a kind of "Swiss model of confederation and subsidiarity") in which Madrid assigns Catalonia widespread freedoms and rights whereas Catalonia ends its attempts to secede from the Spanish State," Hoegger concluded.