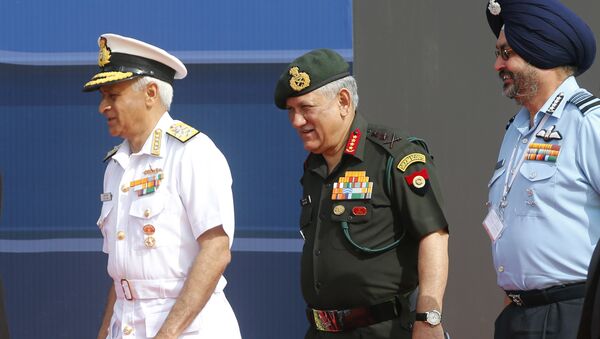 © AP Photo / Aijaz Rahi
Subscribe
The Indian Air Force says it is focussing on the immediate purchase of single-engine aircraft despite the pressing need for twin-engine fighter jets too as the former costs less and they would make up for the shortage at the moment.

NEW DELHI (Sputnik) — Hard-pressed by the shortage of aircraft, the Indian Air Force (IAF) will soon be starting the process of purchasing approximately 124 single-engine combat aircraft this month. The intended aircraft would replace India's aging MiG-21 & MiG-27 fleet due for retirement from the service by 2024.

"The RFI for the single-engine fighter is likely to be issued very soon," Indian Air Chief ACM BS Dhanoa said on Thursday.

Sources told Sputnik that India is expecting the likes of Lockheed Martin and SAAB to bid for the tender and that they would be given three-months time to respond to the RFI. Following the RFI, flight trials will be conducted to evaluate the capability of the aircraft on technical parameters set by the IAF.

The procurement would be executed under the newly approved strategic partnership (SP) model that seeks to identify an Indian private firm as a strategic partner who would tie up with a shortlisted foreign original equipment manufacturer (OEMs) to manufacture fighter jet. The main criteria for the selection of OEMs would be the compatibility of their products with the parameters fixed by the IAF and their level of commitment to provide technology and other assistance to enable their Indian partners to produce in India with maximum localization. The RFP is expected in the second-half of 2018.

In anticipation of the big-ticket deal, Swedish defense and security firm SAAB has chosen India's Adani Group, a new entrant in the field of defense aerospace, for collaboration to come out on top in the single-engine fighter tender. In June of this year Lockheed Martin from the US also intended to join with India's Tata Advanced System to produce the F-16 Block 70 in India.

The IAF is attributing more priority to single engine fighter jets as they cost less in comparison to double engine aircraft.

"Right now, we are concentrating on the single-engine so as to make up the numbers with lower costs. There is a requirement for twin-engine fighters down the road, but engines are "30% of the cost" of a twin, versus 10% of a single," Dhanoa added. Nevertheless, the IAF requires maintaining a ratio of 60:40 between double and the single-engine aircraft.