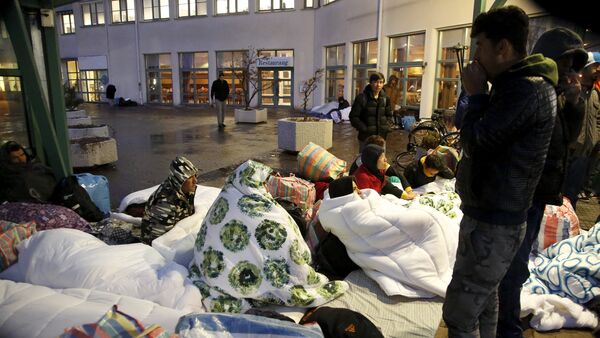 Abuse and threats of violence against the Swedish Migration Board staff has radically increased, in lockstep with the number of rejections. Among other things, female employees report being stalked and threatened with rape. The Migration Board itself explains the applicants' violent behavior with "frustration."

During the first nine months of 2017, a staggering 2,875 incidents of abuse against immigration authorities have been reported in a recent review by the Swedish daily Aftonbladet, which noted a spike in comparison to previous years.

These include female employees who are being persecuted, threatened with rape and terrorized by email and telephone.

"I'm going to screw all you people, I'll even screw your mother later on. I live in your country and I'm going to screw it," an asylum seeker whose asylum application was rejected threatened a female Migration Board employee in a recorded interview cited by Aftonbladet.

Swedish Migration Board Staff Bedeviled By Death Threats From Angry Applicants
The man went on to say that he would go to the woman's house armed and kill her next day. Still not content with his rant, he called the woman a "slut" and pointed out that he was intending to have intercourse with her daughter as well.

In another case, a female employee visited a sheltered asylum home in Skåne County to inform an asylum-seeking family they had to move out. The pregnant mother of the family assaulted the employee with a kitchen knife.

"I was terrified and feared for my own and my colleagues' lives," the public servant later said in a hearing with the police.

Yet another female Migration Board employee in Södermanland was reportedly subjected to sexual harassment outside of her office. According to the police report, an unknown man tried to kiss her on the mouth while not letting the woman go.

Another instance of harassment occurred when an aggressive asylum-seeking man called a female employee 166 times in a single hour while leaving many abusive messages on her voicemail. Her fellow Migration Board staff member received over a hundred emails with death threats and suggestive pictures.

Another employee reported being stalked on her way home and being threatened with being pushed in front of a train.

So far in 2017, 72 cases of pure physical violence have been reported, which is almost the double of 43 cases reported last year.

Luckily, the Migration Board has come up with a persuasive explanation that the threats come from "frustrated" people.

"There may be an everlasting wait for an asylum investigation to start, not to mention the wait for a decision. Then frustration may settle in," Helene Liss, chief security officer at the Swedish Migration Board told Aftonbladet.

Hospital Staff Fear for Their Lives Amid Sweden's 'Bloody Summer'
Liss argued that the Migration Board has always been an authority faced with the risk of threats and violence.

"There are also threats of self-harm and suicide. It is not uncommon for frustrated people to employ this ‘I know where you live' type of rhetoric," Liss argued.

Maria Johansson, a work environment specialist at the Migration Board, said that on her authority had prepared written routines for dealing with such situations.

"Many of the incidents involve frustrated applicants who do not necessarily express themselves in a good way, Maria Johansson argued, adding that this did not constitute a substantial threat.

At the height of the 2015 migrant crisis, Sweden took in a record 163,000 asylum seekers, prompting the Migration Board to employ extra personnel to process the piling applications. Two years later, 85,000 applications are still in the works.