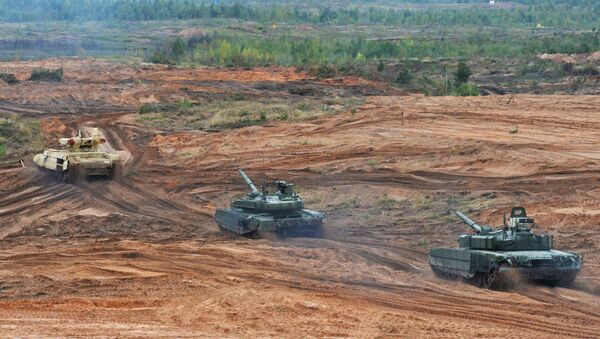 Despite several eastern European states' concerns that Russian military might stay in Belarus after the joint Zapad-2017 war games end, the Russian defense minister has officially announced that troops have returned to their home bases in Russia.

MOSCOW (Sputnik) – The aims of the Russia-Belarus Zapad-2017 military exercises have been reached, the troops that were taking part returned to their permanent bases, Russian Defense Minister Sergei Shoigu said Friday.

"We believe that the goals of the drills have been reached. I am drawing special attention to the fact that all means and forces involved were returned to their permanent bases," Shoigu said.

The minister added that during the drills, authorities of the two states practiced joint activities aimed at ensuring the security of the Union State of Russia and Belarus.

Run-Down: Russia-Belarus Zapad-2017 Military Drills
"Ninety five representatives of 50 states were observing the drills. About 12,700 servicemen, as well as up to 680 pieces of military hardware, about 70 aircraft and 10 ships were engaged in the military exercise," the Russian official added.

He said that the joint drills were aimed at practicing the fight against terrorists, as well as security and protection of important facilities.

According to him, many mainstream media outlets were "scaring with the most incredible scenarios."

"All of these lies were exposed at the end of the exercises which were purely defensive in nature," the minister said.

Shoigu said that the preparations to the strategic drills had taken place amid "unprecedented information pressure."

The Zapad-2017 military drills were held on September 14-20 on the territory of Russia and Belarus. Several eastern NATO member states have repeatedly voiced concerns with regard to the joint drills even before they started, claiming that the Russian troops, deployed in Belarus for the joint Zapad-2017 military exercise, might stay in Belarus after drills, thus, allegedly posing a threat to threat security. The Russian and Belarusian officials have repeatedly refuted the allegations, saying that the planned drills are purely defensive and pose no threat to eastern European states. Moreover, Russia and Belarus invited NATO experts and foreign journalists to observe the drills.