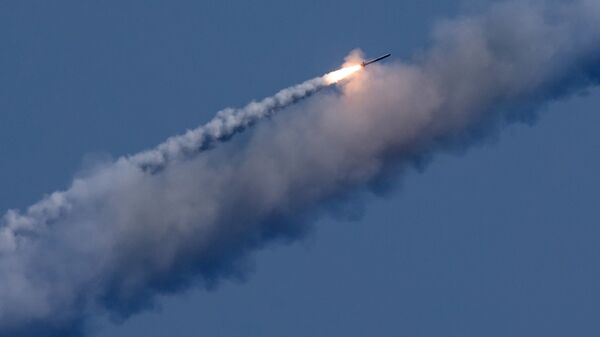 According to Konashenkov, the Russian air group and naval forces continue to support a Syrian government offensive aimed to defeat the terrorist group Daesh in the Euphrates River valley. Over the past week, Russian Defense Ministry intelligence has mapped and targeted the most important Daesh facilities in Deir ez-Zor province.

​"These are the terrorists' command posts, large ammunition depots and hangars with Daesh armored vehicles. To destroy these objects, two submarines from the [Russian] Black Sea Fleet, the Veliky Novgorod and the Kolpino, have delivered two strikes using Kalibr cruise missiles," Konashenkov said.

'Better Than Tomahawks': How Russia's Kalibr Missiles Raze Daesh Targets
Konashenkov noted that the attack on terrorist targets in the city of Mayadin was carried out to support the offensive of the Syrian government troops in Deir ez-Zor.

Konashenkov said the launches of 10 cruise missiles were made from a submerged position, adding that objective control equipment confirmed the destruction of all assigned targets.

"Daesh terrorist group in the area of Mayadin suffered significant damage, both in manpower and hardware," he said.