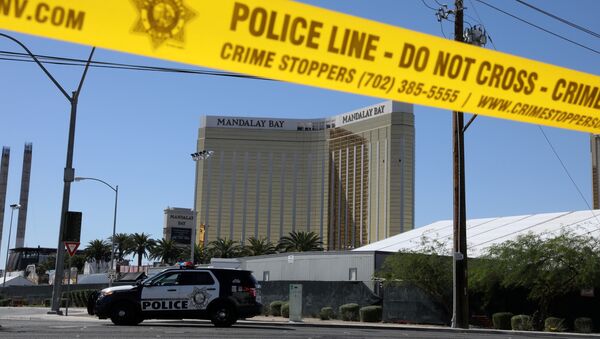 "What we know is Stephen Paddock is a man who spent decades acquiring weapons and ammo, and living a secret life, much of which will never be fully understood," Lombardo said on Wednesday. "He meticulously planned on the worst domestic attack in United States history."

"More than a hundred investigators have spent the last 72 hours combing through the life of 64-year-old Stephen Paddock to produce the profile of someone I will call disturbed and dangerous," Lombardo said.

Las Vegas Shooter's Girlfriend Says She Knew Nothing of Plans for Violence
Sheriff noted that US authorities do not know what ran through the Las Vegas gunman’s mind when he rented a room at the Ogden hotel in late September.

"Paddock rented a room at the Ogden hotel in downtown Las Vegas, this has been confirmed," Lamborado said on Wednesday. "The reasons that ran through Paddock’s mind are unknown but it was directly during the same time of Life is Beautiful."

Media reported that Paddock may have planned an attack in late September targeting the Life is Beautiful outdoor music festival, which featured Lorde and Chance the Rapper. The room rented at the Ogden hotel overlooked the outdoor concert.

On Sunday night, 64-year-old Stephen Paddock opened fire on a crowd of concertgoers in Las Vegas from the 32nd floor of the Mandalay Bay Resort and Casino, killing 59 and wounding 527. Las Vegas police said they found at least 10 rifles in Paddock’s hotel room and 18 additional firearms, explosives, and ammunition at his home.