Political Impotence: Why Brussels is Unable to Solve Balkan and Catalan Dilemmas 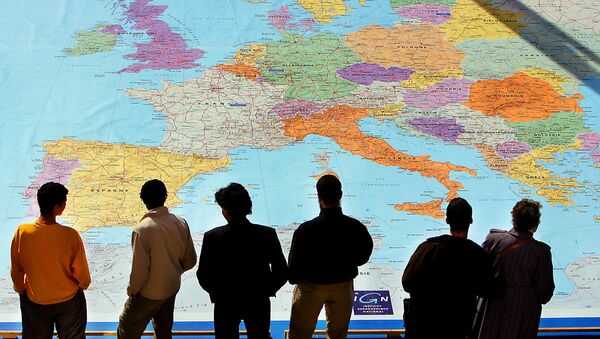 © AFP 2021 / PHILIPPE HUGUEN
Subscribe
Although the EU expansion proponents are insisting that the accession to the bloc is a panacea for regional political problems and ethnic divisions, the facts prove otherwise: Brussels has no leverage to solve old national conflicts simmering in Europe and is unable to bring order into its own house, Serbian experts told Sputnik.

The European Union is incapable of solving ethnic and political tensions either in the Balkans or in its own heartland, Serbian experts told Sputnik.

Brussels and European integration supporters continue to push ahead with the idea that Serbia's accession to the EU will automatically reduce conflict between the Serbs and the Albanians, erase the border between Serbia and Kosovo and resolve the dilemma of the country's territorial integrity. They insist that the bloc will prevent potential unrest in the Balkans and drop the hint that Yugoslavia would not have collapsed if it had entered into the "European family."

However, facts on the ground prove otherwise, Professor Dejan Mirovic of the University of Pristina-Kosovska Mitrovica highlighted.

"It's not propaganda, it's a lie," the academic told Sputnik Serbia. "This is being done to persuade countries like Serbia to sell their resources and renounce their sovereignty."

Serbia to Investigate Consequences of 1999 NATO Bombing
The events of recent months have clearly indicated that Brussels has yet to become an influential broker for Balkan states: Eurocrats have failed to settle both the Macedonian political crisis and Croatia-Slovenia border disputes.

Furthermore, Brussels is unable to bring order into its own house, the expert said, referring to the recent Catalan independence vote that prompted political tension within Spain as well as fears that the referendum would trigger a domino effect for other European countries.

"European integration and democracy are different things, and they [Eurocrats] are trying to convince us that they are synonyms," Mirovic stressed.

For his part, Dragan Djukanovic of Belgrade-based Center for Foreign Policy, called attention to the fact that the "separatism phenomenon" is spread throughout Europe and explained that Brussels "has no specific authority to interfere in the situation."

Catalan Independence Vote Risks Creating 'Domino Effect' in France
In any event, the Catalan issue may result in the postponement of Balkan states accession to the bloc, since Brussels will be busy coping with its internal problems, according to Bojan Milisavljevic, associate professor at the Faculty of Law of Belgrade University.

Milisavljevic specified that "in regard to Serbia, this [also] means that its admission to the EU will be delayed."

The academic pointed out that Serbia still has an opportunity to discuss the issue of its joining the European bloc in a national referendum, citing a similar precedent in Norway.

On the other hand, according to Mirovic, most of the citizens of Serbia are against entering into the EU, therefore he voiced skepticism over Brussels allowing the Balkan state to hold a plebiscite of this kind.

King's Condemnation of Catalan Vote is Spain's Bid for 'Certain Consensus'
Meanwhile, Catalan's future is still hanging in the balance, undermining positions of the of the EU expansion proponents.

On October 1, Catalonia held a referendum on independence from Spain. According to the Catalan authorities, a total of 90 percent of the region's population voted in favor of separation from Madrid.

The Spanish government refused to recognize the vote while police moved in to shut down polling stations, triggering violent clashes with protesters and voters. The Catalan Health Department said that hundreds of people sought medical help after the skirmish.

The hostile actions of Spanish law enforcement officers during the plebiscite prompted a Catalan general strike on Tuesday.

While the EU signaled its full support to Madrid, Catalonia's President Carles Puigdemont announced that the region would declare independence within several days.