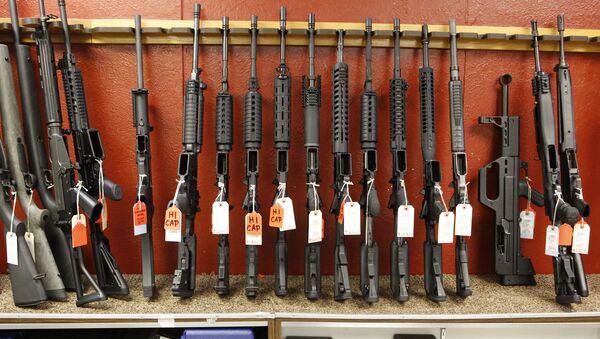 Twelve of the rifles the shooter in the Las Vegas massacre had in his hotel room were modified with bump stocks, attachments that allow semi-automatic rifles to fire at faster rates.

"In the aftermath of the evil and senseless attack in Las Vegas, the American people are looking for answers as to how future tragedies can be prevented," the statement reads.

"Despite the fact that the Obama administration approved the sale of bump fire stocks on at least two occasions, the NRA is calling on the Bureau of Alcohol, Tobacco, Firearms and Explosives (ATF) to immediately review whether these devices comply with federal law," the statement adds.

On Thursday, Kellyanne Conway, counselor to US President Donald Trump, implied that the White House is also open to discussing the banning of bump stocks.

Conway also suggested that Obama's administration is responsible for not regulating the dangerous gun accessory.

"I would just note for the viewers, that since bump stock has not been in the lexicon before, this is a device that President Obama's ATF decided would not be regulated in 2010 and I think that's an important part of this conversation," Conway said on Fox & Friends.

On Thursday, the No. 2 Republican in the US House of Representatives states that he expects Congress to implement regulations regarding the use of bump stocks.

NRA is 'The Political Wing of Domestic Terrorist Organizations'

"This is definitely an area we should look at," House Majority Leader Kevin McCarthy told the Fox News Channel.

"The one thing I do want to do is, let's let the sheriff and the authorities carry out their entire investigation. But I think this is definitely an area we're going to look [at] and be able to act on," he said, referring to the potential ban on the use of bump stock accessories.

However, some are skeptical of the NRA's support for regulation, seeing it as an effort to get around an all-out ban. Ronald Klain, an American political operative and lawyer, tweeted Thursday that the "NRA announcement is an effort to kill a congressional ban on bump stocks," adding "Don't be fooled."

000000
Popular comments
it is sad to say that the profile of the NRA may allow some to see this as a political ploy, rather than a heartfelt response to the events which have effected so many.
michael
5 October 2017, 22:53 GMT2
000000
Oh. Everyone I hear is saying that the LA shooting is a false flag event with the idea of government taking away yet another US law - the right to bear arms?? Wrong again?
Emma
5 October 2017, 22:58 GMT2
000000
Newsfeed
0
New firstOld first
loader
LIVE
Заголовок открываемого материала
Access to the chat has been blocked for violating the rules . You will be able to participate again through:∞. If you do not agree with the blocking, please use the feedback form
The discussion is closed. You can participate in the discussion within 24 hours after the publication of the article.
To participate in the discussion
log in or register
loader
Chats
Заголовок открываемого материала
Worldwide
InternationalEnglishEnglishMundoEspañolSpanish
Europe
DeutschlandDeutschGermanFranceFrançaisFrenchΕλλάδαΕλληνικάGreekItaliaItalianoItalianČeská republikaČeštinaCzechPolskaPolskiPolishСрбиjаСрпскиSerbianLatvijaLatviešuLatvianLietuvaLietuviųLithuanianMoldovaMoldoveneascăMoldavianБеларусьБеларускiBelarusian
Transcaucasia
ԱրմենիաՀայերենArmenianАҧсныАҧсышәалаAbkhazХуссар ИрыстонИронауОssetianსაქართველოქართულიGeorgianAzərbaycanАzərbaycancaAzerbaijani
Middle East
Sputnik عربيArabicArabicTürkiyeTürkçeTurkishSputnik ایرانPersianPersianSputnik افغانستانDariDari
Central Asia
ҚазақстанҚазақ тіліKazakhКыргызстанКыргызчаKyrgyzOʻzbekistonЎзбекчаUzbekТоҷикистонТоҷикӣTajik
East & Southeast Asia
Việt NamTiếng ViệtVietnamese日本日本語Japanese俄罗斯卫星通讯社中文（简体）Chinese (simplified)俄罗斯卫星通讯社中文（繁体）Chinese (traditional)
South America
BrasilPortuguêsPortuguese
NewsfeedBreaking
06:56 GMTGOP House Members File Impeachment Articles Against Biden Over 'Clear Violations of His Duties'
06:53 GMTUK's Claims About Third Russian Involved in Skripal Case 'Another Lie', Foreign Intel Chief Says
06:42 GMTFormer Islamist Preacher: 'There is a Salafist in Every Swedish Mosque'
06:33 GMTAlgeria Closes Airspace to All Planes From Morocco Over 'Provocations'
06:28 GMTRussia Ready to Cooperate With New German Gov't Based on Mutual Respect, Ambassador Says
05:29 GMTUS Sanctions Suffocating Syrian People, International Community Must Act, Foreign Minister Says
05:09 GMTLebanese Public Hopes New Gov't Will Tackle Economic Crisis, But What are the Odds It'll Succeed?
04:32 GMTIndian Scientists' Experiment May Solve Treatment Puzzles of Neurological Disorders Like Alzheimer's
04:31 GMTModi Arrives for Visit in Washington, Welcomed by Diaspora, Foreign Ministry Says
04:30 GMTDon't Do That! Shiba Inu Worried Its Cat Buddy May Get Hurt
04:15 GMTLive Updates: India Records 31,923 COVID-19 Cases Over Past 24 Hours
04:09 GMTPhoto: Armored Vehicles, National Guard Appear on Texas Border Amid Abbott's 'Steel Wall' Deployment
03:58 GMTBannon Admits He Spoke With Trump About 'Killing' Biden Presidency Ahead of Deadly Capitol Riot
03:00 GMTWreckage of Disappeared An-26 Plane Found in Russia's Khabarovsk Territory - Source
02:20 GMTLavrov Holds 1st Meeting With Truss in New York Amid New UK Accusations in Skripal Case
01:49 GMTDHS Looks to Staff Gitmo Migrant Facility With Guards Who Speak Haitian Creole Amid US Border Surge
01:30 GMTRussian Crew Leaves Boat Pilgrim in Alaska, Will Renew World Trip Next Spring - Captain
01:00 GMTWall Street Up Broadly as Fed Signals Caution With US Stimulus Taper, Rate Hike
00:45 GMT‘This Moment Demands Action’: Biden Eyes Executive Actions After Fruitless Police Reform Talks
00:26 GMTMoroccan Liberal Parties Form Coalition Government, Ousting Islamists After Decade of Rule