Putin Hopes Russia-US Ties Will Improve Due to Shared Interests 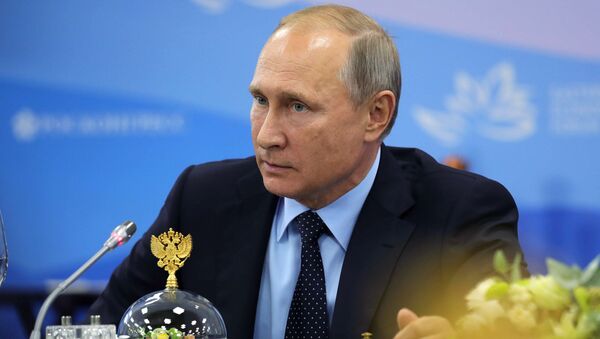 © Sputnik / Michael Klimentyev
/
Go to the photo bank
Subscribe
Russian President Vladimir Putin said Wednesday that he expected the fundamental mutual interests of Russia and the United States to lead to the improvement of bilateral relations.

MOSCOW (Sputnik) – Speaking at a plenary session at the Russian Energy Week forum, Putin said that Russia and the United States had shared fundamental interests, such as determining energy policies, fighting cyber-crime, preventing the proliferation of weapons of mass destruction and resolving the conflict in Syria and other regions.

"These fundamental mutual interests will sooner or later change the nature of Russia-US relations for the better," the President said.

Moreover, Putin said that he had almost no personal relationship with US President Donald Trump, adding that they met once.

US Congress Wants Twitter to Find Anything to Justify Russia Witch Hunt
His attempt at reconciliation follows a chill in the two nuclear powers' diplomacy. In late July, Moscow ordered that the US diplomatic presence in Russia be reduced to 455 people. The move was retaliatory: this is the same number of diplomatic personnel that Russia has had in the United States since then-US President Barack Obama ordered the expulsion of 35 Russian diplomats in December 2016.

In August, the United States demanded that the Russian Consulate General in San Francisco, the trade mission in Washington and the branch of the trade mission in New York suspend their operations as of September 2. After Russian diplomats left the diplomatic compounds, US security agents raided the premises. The Russian Ministry of Foreign Affairs called Washington's move a "gross violation of international law."