Two-Year Air Campaign: How 'US Plan to Split Mid-East Up' Failed Due to Russia 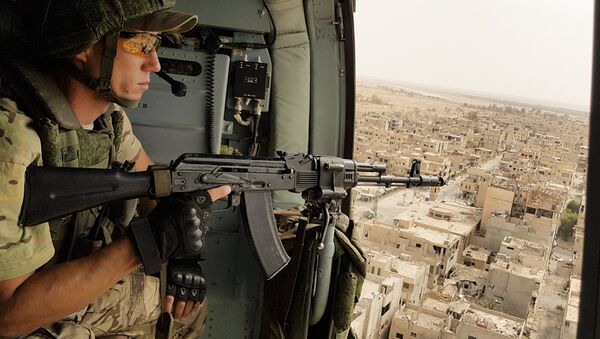 During a two-year aerial campaign Russia and its allies have managed to create a powerful coalition in Syria that thwarted the US' attempts to split the region up, experts told Sputnik. However, the war is far from being over, especially in light of the looming threat of Iraq's disintegration after the Kurdish independence vote of September 25.

Despite all the efforts of the White House, a powerful coalition to combat terrorism and foreign interventionists was formed with Russia's assistance," Syrian Arab Army Brigadier General Muhammad Abbas told Sputnik Arabic. "Due to the joint efforts of Syria, Russia, Iran, Iraq and all the BRICS countries it became possible to create an effective force to fight the common enemy."

According to Brig. Gen. Abbas, well-coordinated collaboration between the members of the Russo-Syrian coalition, the sharing of intelligence, and professional work of Syrian officers ensured "the high accuracy of [military] operations and, as a consequence, victories on the battlefield."

However, the war is far from being over yet, the Syrian general emphasized: first, it will take a lot of effort to bring the conflict to a halt; second, the Syrian war is by no means a regional conflict.

"This is an international war in which the US uses terrorism as its main tool," Brig. Gen. Abbas said. "With this formidable weapon, the Americans are fighting against 'undesired states.' It was expected that the war in Syria and Iraq will continue on a permanent basis. There were plans in the future to unleash a war against Iran and Russia."

US' Plan B? From Alleged Evacuation of Daesh to the Murder of Russian General
The general believes that Washington has not abandoned its plans yet: the conflict is being exported to other regions — former Soviet Republics south of Russia, Myanmar, and Iraqi Kurdistan. Islam is being used as a smokescreen for the operations aimed at undermining Russia, Iran and the countries of the Middle Eastern region, according to the military expert.

Syrian political scientist Akram al-Shilli echoed Brig. Gen. Abbas: Contrary to popular belief, terrorists are not isolated fighting groups, but a complicated organization with its own leadership and big aggressive states behind them, such as, for example, the United States. According to al-Shilli, the US had a hand in creating al-Qaeda, Daesh (ISIS/ISIL) and al-Nusra Front.

The political scientist suggested that even though Washington's plan to tear the Middle East apart has largely failed, the focus has been shifted to Iraqi Kurdistan. Referring to the independence vote that took place on September 25 in the Iraqi autonomous region, al-Shilli called attention to the possible implications of the emergence of a sovereign entity on the territory of Iraq.

"If Iraqi Kurdistan gets independence, then Kurdish enclaves in northern Syria will want to join this formation," al-Shilli pointed out. "In the future, this will cause divisions in the [Middle Eastern] region, which is exactly what US politicians want. Therefore, we can't assume that the US has abandoned its plans."

Two-Year-Long Russian Air Campaign Dramatically Changed Syrian War
Still, those who are harboring plans to divide and rule the Middle East will face resistance from dozens of the countries from the region and beyond, the political scientist predicts: "It will be difficult [for the US] to accomplish its plan."

September 30 marked the second anniversary of the Russian air campaign in Syria. In the course of the two-year aerial campaign in Syria, about 87.4 percent of Syrian territory has been liberated with 2,237 residential areas joining the cease-fire regime. The Russian Air Force conducted 30,000 combat sorties in Syria destroying 96,000 terrorist targets.

After retaking Palmyra and Aleppo from the terrorists, the Russian Aerospace Forces assisted the Syrian Arab Army (SAA) in the freeing of Deir ez-Zor. On September 5 the SAA managed to break the three-year-long Daesh blockade of the city and started expelling terrorists from the region, while the liberation of Idlib is still to be completed.

On October 3 Russian Defense Ministry spokesman Maj. Gen. Igor Konashenkov reported that Russia's Aerospace Forces eradicated 304 Daesh terrorists amid the offensive against the jihadists on the eastern bank of the Euphrates River near Deir ez-Zor.

"The center for the assembly and training of Daesh foreign mercenaries, including about 40 militants from the North Caucasus, as well as a mobile sniper group of terrorists, were destroyed by an airstrike," Konashenkov emphasized, adding that three command posts, nine terrorist strongpoints, eight tanks, three artillery systems, 17 SUVs with large-caliber weapons and four ammunition depots were also destroyed."