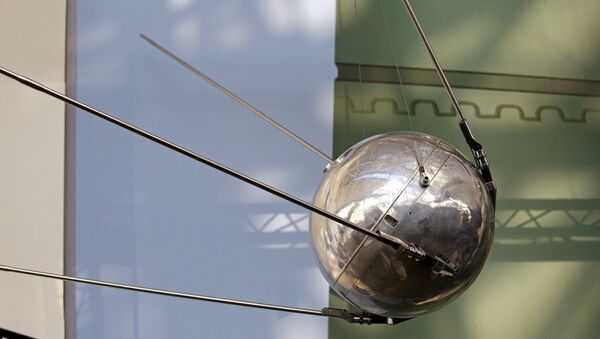 © AP Photo / Elaine Thompson
Subscribe
On Wednesday, the world will celebrate the 60th anniversary of the launch of Sputnik 1, the first man-made satellite ever to orbit the Earth. The Soviet satellite, which launched October 4, 1957, heralded the beginning of the Space Age, which has allowed humans to leave Earth for the first time in the history of our species.

Sputnik (the satellite, not the news outlet) was launched into space from the Baikonur Cosmodrome in Kazakhstan. It was loaded on the back of an R-7 Semyorka, the first ever intercontinental ballistic missile. The launch very nearly failed after the R-7 suffered booster malfunction. Flight Control managed to correct the rocket's course and successfully complete the launch.

The satellite locked into an elliptical Low Earth Orbit, ranging from 134 to 583 miles from the planet's surface. Of course, by modern standards, little Sputnik 1 wasn't very impressive. A beach ball-sized metallic sphere with four thin legs, it weighed 183 pounds and couldn't really do anything except make a beeping noise (which could not be heard in the vacuum of space, of course). However, Sputnik 1 also contained a radio transmitter so amateur radio operators could track it — which incidentally gathered information about the electron density of Earth's ionosphere.

Sputnik also had a reflective surface which made it visible to the naked eye from Earth's surface at certain times of day. After 22 days (eight more than predicted), Sputnik's batteries gave out and the radio signal stopped. On January 8, Sputnik 1 burned up in Earth's atmosphere, traveling 43 million miles across 1,440 orbits.

The original design for the satellite was a 3,000-pound spacecraft equipped with many instruments, but the Soviets wanted to beat the Americans into Low Earth Orbit. In December 1957, the US attempted to launch the Vanguard TV3 — but the rocket failed and damaged the satellite beyond repair. The US wouldn't make it into space until February 1958 with Explorer 1.

Sputnik 1 may have just been a ball of metal — the real star was the R-7 that carried it into space. However, it blew the door open to human exploration of space, a titanic endeavor that continues to this day. Then-American president Dwight D. Eisenhower declared in 1958 that Sputnik 1 and its successor satellite, Sputnik 2, had proved that the Soviets had outpaced the US "and the rest of the free world" in scientific advancement when it came to space.

Washington replied with the creation of the National Aeronautics and Space Administration (NASA) as well as the Defense Advanced Research Projects Agency (DARPA). Soon the Space Race between the Cold War rivals was in full swing: first living thing in space (Laika the dog aboard Sputnik 2), first photograph of Earth from orbit (Explorer 6 in 1959), first man in space (Yuri Gagarin aboard Vostok 1 in 1961), and first woman in space (Valentina Tereshkova on Vostok 6 in 1963), and of course, the first man on the moon (Neil Armstrong on the Apollo 11 in 1969).

The Space Race would come to an end in 1975 with the Apollo-Soyuz Test Project, where the US and the Soviets collaborated on a scientific mission. Today, over 1,400 operational man-made satellites orbit planet Earth. They allow us to communicate with other humans all across the planet, they study both our planet and the distant cosmos, they power the GPS in your car and phone and they serve as platforms for the development of cutting-edge technology.

None of that would be possible without Sputnik 1.